Accel Leon (Japanese: アクセルレオン, Akuseru Reon) is the B-Daman of Assado. It is a Rapid Fire/Control-Type Zero System B-Daman. It was released in Japan in March 2004 and sold for 980円.

Accel Leon features a black IBA Body skeleton to where the armor parts can be attached.

This part is silvery-colored with gradient yellow/black designs, especially its visor. Adding to its lion motif are two fins on either side designed like a lion's mane.

These parts are silvery-colored along with gradient yellow/black and blue. It has two braces that go over the shoulder as armor.

These parts are silvery-colored has a lion motif along with a 3-toed texture at the front and has a gradient yellow/black design over the foot.

This B-Daman is equipped with the Loader Server for extra space for holding marbles. On the sides are areas where you can store the Speed Loaders.

The Speed Loaders on the back of the B-Daman allows you to pick up marbles and place it on the Loader Server to reload the Magazine. It is equipped with two of them, so you can reload with one hand, and fire with the other hand.

The Long Trigger Wing provides you a one-handed wing grip and an extended Trigger to allow for one-handed holding and firing from the rear.

As with any IBA Body Core, Accel Leon's is not interchangeable. It has dark blue Hold Parts, along with a standard Trigger of the same coloration.

Accel Leon is first shown to have immense rapid fire but limited accuracy when it was used to battle Cobalt Blade and Yamato in the Leon Stage of the Five Field Challenges. Accel Leon is next used to battle Liena's Garnet Wind to no contest. Accel Leon debuts its special ability, "Lion Claw", while battling Manual and his B-Daman. Accel Leon and Cobalt Saber are able to combine their special shots to form the "Lion Claw Power Blast" to defeat Manual in his Revenge Mode.

The Long Trigger Wing is one of the best pieces for one-handing holding and firing, thanks to the width of the wing unit

Accel Leon in the anime. 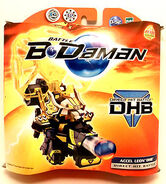 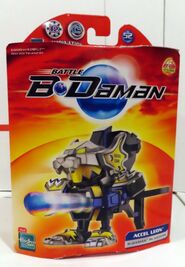 Accel Leon with One-sided=Dracyan
Add a photo to this gallery
Retrieved from "https://bdaman.fandom.com/wiki/Accel_Leon?oldid=44695"
Community content is available under CC-BY-SA unless otherwise noted.