Across Avian (Japanese: アクロス＝イグル, Akurosu=Iguru Across=Eagle) is a hybrid Power/Control-Type B-Daman, featured as part of the Emblem Charge System. It can only be acquired by getting the Eagle 2 Body Set from the CB-59 Body Random Booster Vol. 1 and the Across Core from the CB-60 Garuburn DX Version-Up Set.

It is a re-designed version of the original Eagle Head Part from the Core Change System Strike Avian, with a more detailed and streamlined look to it. Like with the original Eagle Head Part, it is shaped like an eagle's head with a blue visor in the open beak and blue eye details on the top. The yellow part of the upper beak is the adjustable Eagle Sight, which can be used for aiming.

The Eagle 2 Emblems are mounted on two foldable wings, which are attached to the Wing Arm Parts. When pressed, the marble would fired a bit more powerfully while still retaining accuracy.

Across=Eagle's Stud Parts are solid yellow, as with Strike Avian.

These are a more streamlined and detailed version of Strike Avian's Arm Parts. The wings, which also hold the Emblems, are mounted on the Arms.

This unique Leg Part allows the B-Daman to be swiveled in two directions, allowing the user to aim and fire angled shots.

Across has a color scheme reminiscent of the original Steer Core released with Strike Avian early on in the Core Change System. The lip of its Trigger can be rotated for either accuracy or power. As mentioned before, this Core Part can only be acquired by purchasing the Garuburn DX Version-Up Set. 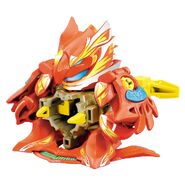