Alan is a character appearing in the game series of Battle B-Daman. His B-Daman is Thermal Lance.

Alan is a young man with light blue hair where a large ahoge pops out from it. He wears a blue-themed, somewhat priest like outfit with a red marble in the middle. He seems to have some kind of red marking on his forehead.

Alan is a priest who lives in a church in Saitoon. He is normally happy and cheerful guy, but he sometimes show signs of sadness.

He used to be a drifter as well as an apprentice to priesthood. When he arrived in Saitoon to discover an abandoned church, he became fond of it and decided to become the priest of the town.

Yamato was first notified of Alan being acquainted with Armada in Saitoon. However, Alan has already left to town to settle a business with a "demon-looking" B-DaPlayer when he arrived at the Church. Alan soon returns and was approached by Yamato. Upon hearing that he owns Cobalt Blade, Alan immediately handed Yamato the directions to Yamato's house.

While Yamato's training with Armada went on, Alan left the town for a day and returned becoming a B-DaPlayer participating in the Winners Tournament. It turns out that the final part of Cobalt Blade was on his hands, and Yamato had to battle him to receive the final part as part of his mission. Alan mentions about his "two missions", however not revealing his other mission. 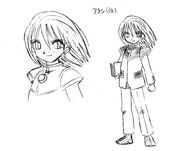 Alan as drawn by Eiji Inuki.
Add a photo to this gallery
Retrieved from "https://bdaman.fandom.com/wiki/Alan?oldid=41116"
Community content is available under CC-BY-SA unless otherwise noted.