This article is for the manga version of Aona Godai. For their anime counterpart, see Aona Godai.

Aona Godai (Japanese: 御代アオナ, Godai Aona) is a supporting character in the second half of the manga series, Cross Fight B-Daman by Makoto Mizobuchi.

Aona is a strict but caring older sister to Kamon.

Aona's manga counterpart is shown to be more violent than her anime counterpart. This is evidenced with her carrying around a frying pan in which, at one occasion, she nearly used it to hit Kamon's head when the boy was trying to escape. She also carried a frying pan as a means of self defense against the Grand B-Master whom she knew all along was Ryoma.

Aona about to hit Kamon 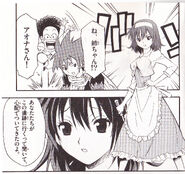 Aona about to hit the Grand B-Master

Aona in Tama-chan's daydreams
Add a photo to this gallery

Retrieved from "https://bdaman.fandom.com/wiki/Aona_Godai_(Manga)?oldid=36360"
Community content is available under CC-BY-SA unless otherwise noted.