A B-Shot hailing from the North Block.

His B-Daman, Drift Jaku, can fire the irregular Curve Shot.

He is a charismatic, but narcissistic, child model with a strong sense of beauty.

He always carries a folding fan.

Asuka is a tall and fair-skinned orange-haired young man sporting a Japanese-style clothing. He is notable for his androgynous features and graceful mien; all of which are ideal for his job as a model. He is also always seen carrying a folding fan.

Asuka first came out as an egoist and narcissist but after losing to Riki, he warmed up to him and acknowledged him as his "eternal rival." Asuka would later aid riki and Co. with his share of fortune such as when he gave a luxurious hotel accomodation for them in the North City and when he gave a plane ride to Reggie, Hugo and Gunner.

Asuka is also enamored with Sumi's enthusiasm and poetic skills. 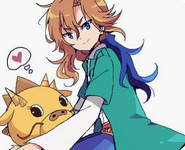 Retrieved from "https://bdaman.fandom.com/wiki/Asuka_Kami?oldid=49296"
Community content is available under CC-BY-SA unless otherwise noted.