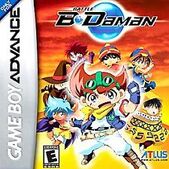 Battle B-Daman is the first B-Daman video game to be released on the Nintendo Game Boy Advance portable gaming system. The game was released on July 25, 2006.

Yamato Delgado dreams of playing B-Daman and his dream came true when Grey Michael Vincent interrupts Yamato's birthday by challenging him. Then, an incomplete Cobalt Blade comes out of the wall and then Yamato battles Grey. After the event, Yamato sets out to find all the parts of Cobalt Blade while battling other B-DaPlayers all over. Yamato then gets trained by Armada then competes in the Winner's Tournament to battle all other strong B-DaPlayers.

This game plays like a first-person shooter during battles. There are two ways to battle in-game: Direct Hit Battle or B-Daman Invasion. One must press A to shoot whilst filling up the B-DaSpirit gauge. Whenever the D-Pad shape starts blinking along with the red triangles on whatever directions, one must press B and the desired direction of the red triangle simultaneously to fire a Special Attack. Special Attacks can be changed throughout the game by customizing your B-Daman. For example. whenever one equips a Aqua Booster on the back, the Special Attack will change to Rapid Wave, which fires 4 B-DaBalls at the opposing B-Daman.

Packaging
Add a photo to this gallery

Retrieved from "https://bdaman.fandom.com/wiki/Battle_B-Daman_(Video_Game)?oldid=40718"
Community content is available under CC-BY-SA unless otherwise noted.