Cobalt Blade is the first episode of the Battle B-Daman series. It first aired in Japan on January 05, 2004.

The episode begins with the B-Da Mage explaining that she will be the narrator of Yamato's journey into the B-Da World. Then the B-Da Mage explains how Armada is the greatest inventor of the B-Da World as he creates Cobalt Blade. Cobalt Blade then flies of in a shooting star like form to Yamato Delgado. Yamato and his cat Tommi are then seen running into town as they see a large crowd of people Tommi simply runs into the crowd while Yamato exclaims that he was raised by cats and he can run like one as well. As Yamato jumps from building to building he jumps over Li and Wen who are seen in an alley way. As Yamato and Tommi race towards their house, Enjyu is seen on a cliff commenting on how Yamato will never defeat him. Yamato then jumps off a tall rock but falls into his Mom's cafe sign and Tommi defeats Yamato in the race as his mom appears out of the cafe. While Yamato's in the cafe, Cobalt Blade calls out to him but Yamato's mother interrupts and sends Yamato out for sugar. On his way back from the store he sights a B-Da Battle in progress. The show is then interrupted as the B-Da Mage explains B-Daman's origin and how its played. As the story returns to the B-Da world the battle is interrupted by two thugs that say no one plays on their territory. Yamato interrupts the two and challenges them to a "challenge" in Yamato's own words, the two then taunt Yamato about never playing B-Daman and as the Tiger thug prepares to hit Yamato his stick is shot by Terry's Wing Ninja B-Daman. Terry then shoots the water carrier above them and the water comes down and as its splashing the container comes over top and covers them. The two who were interrupted by the thugs then ask Terry if he would like to B-Da Battle but then Terry explains how he only plays for high stakes and then jumps away. As Yamato exclaims his excited feeling about Terry's actions he is interrupted by Bull asking "are you gonna stay out here all night". The two share a conversation and walk back to Yamato's house and then out of the desert Grey Michael Vincent appears as they are walking away. As they approach Yamato's house Bull leaves and Yamato enters his home. Once inside he calls for his mother as she surprises him with a chocolate and cat treat birthday cake. While Yamato and his mother share a conversation Grey appears through the cafe door and surprises both of them. Mie then asks who he is then Grey explains that he's come for Cobalt Blade. Grey then kicks over the table destroying Yamato's birthday cake, this sets Yamato off and he yells at Grey, Grey then threatens him as he pulls out his Chrome Zephyr B-Daman. The wall next to them then breaks open as a large ray of light shine out of it. Then a shooting star like ball flies to Yamato and takes its true form. It is revealed to be Cobalt Blade by Grey. Mie then explains that it is his B-daman and his destiny. Grey then challenges him to a 1 on 1 direct hit battle for Cobalt Blade. The two prepare and the battle begins, Yamato vs Grey. The battle begins as Yamato fires off shots and Grey easily dodges them, Grey then fires a power shot and hits Yamato's shield, taunting him. Grey then tells him that he has no strategy and is just firing rapidly, he says that a great battler has his own style but Yamato has nothing. Yamato is then shot by Grey's Chrome Impact Slam and Yamato falls backwards as him mom tells him cats always land on their feet, this encouragement causes Yamato to begin thinking like a cat. Grey's finishing shot misses much to his surprise as Yamato tells him that he felt the shot coming, to Grey surprise he figures that Yamato can feel the B-Da power. Yamato loads his last shot and Cobalt Blade begins to change into its battling form with the flame stripes and eyes on the visor. With Yamato's new found abilities he is able to dodge Grey's next shot and returns fire with a power shot, Grey does the same in panic and the two B-Da balls collide, and the two use their B-Da power to push both of their B-Da balls at each other, Grey tries to push his forward but to no avail, Yamato pushes his past Grey's and get a direct hit on Chrome Zephyr, winning the battle. The next scene is now inside a strange room where Li ad Wen are seen with Ababa commenting on Yamato's power. Next everyone see's as Bull (now in brave form) crashes Yamato's celebration, challenging him to a B-Da battle, ending the episode. 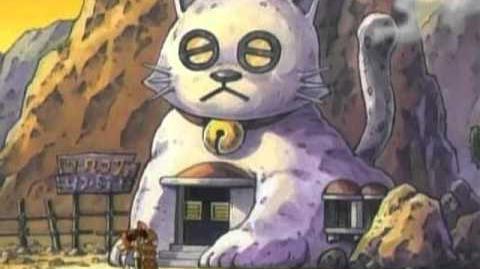 Bull's brave form
Add a photo to this gallery
Retrieved from "https://bdaman.fandom.com/wiki/Battle_B-Daman_-_Episode_01?oldid=45477"
Community content is available under CC-BY-SA unless otherwise noted.