B-DaBattle Mountain is the second episode of the Battle B-Daman series. It first aired in Japan on January 12, 2004.

The episode begins where the last episode left off, Bull (brave form) challenging Yamato to a battle for Cobalt Blade. He then shows off Helio Breaker's appearance and power, and threatens to destroy Mie's cafe. Bull then fires at the cafe after Yamato refuses to give him Cobalt Blade, Bull's B-Da balls are intercepted by Grey who is protecting the cafe. Grey then fires at Bull much to his surprise but to no avail, Bull dodges Grey's attack, and then flees the scene. Grey then tells Yamato not to get the wrong idea and leaves as well. Back at Shadow Alliance headquarters Ababa, Li and Wen are seen talking about Bull along with Enjyu talking about how because they have Liena they control Grey. After having a dream about becoming the worlds best B-Daman Battler he sets out to train but has trouble maintaining his B-Daman skills. Feeling down on himself Mie comes in and help him by explaining the story of how she found him with Cobalt Blade and how he's destined to become a great B-Da player. Afterwards Bull comes through the door back in his calmer form (Yamato not recognizing that he's the same person who challenged him) the two exchange a conversation about Cobalt Blade and Grey's origin. The two then set out to find Grey, Bull leads Yamato up a large mountain to find Grey. At the top the two are met by Grey practicing with his Chrome Zephyr. Surprising him Yamato challenges Grey to another B-Da battle, Grey sets the terms for a DHB and the battle begins. The battle begins with Yamato firing but to no avail due to the win at the top of the mountain. Grey then fires his B-Da ball of to the side, Yamato isn't phased due to his ignorance but the wind curves the B-Da Ball and almost hits Yamato much to his surprise. Yamato fires off a whole another round but the wind simply curves them away Grey, reading the wind grey fires two B-Da balls at the curve directly at Yamato but having cat like reflexes Yamato intercepts them with direct fire. The battle continues with Grey firing curve balls and Yamato intercepting, Grey then fires them in several different directions, Yamato dodges two and intercepts the other, wearing him out. Yamato then learns to read the wind through Bull's "wind snot" and fires at Grey much to his surprise, but as the battle advances Yamato's arm begins to hurt due to a falling rock when they climbed up the mountain. Yamato doesn't give up and Grey is reminded of a memory of his little sister saying he used to be like Yamato. The two then begin firing intense curve balls that are evenly matched in strength, the final two B-Da balls collide with immense strength, after a hard fought battle the two balls fall to the stage ending the match in a draw. The two are then interrupted by Bull back in brave form, commenting on the two B-Daman's abilities and how he's going to take them. Yamato and Grey realizing that the two are one are surprised and comment on his betrayal and how this happened. Bull (now in wild form) proceeds to attack Yamato but is defended and counter attacked by Grey. This knocks Bull off the cliff but Yamato saves him from falling much to Bull's surprise its just like when he saved him from falling on his calm form. Grey comes to help and the two pull Bull up from the cliff. The three introduce themselves and now seem to be acquainted as friends. The three return to the cafe and Bull explains how he cant remember anything in wild or brave form. The three converse in Yamato's room where they are interrupted and yelled at to go to sleep ending the episode. 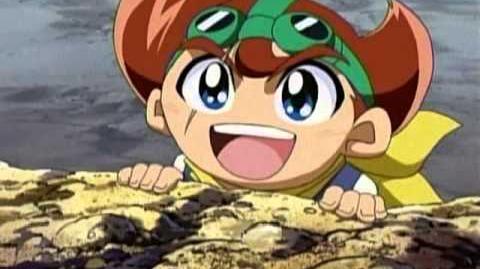 Grey and Liena in his flashback

Grey shown without his cloak

Chrome Zephyr, Cobalt Blade and Helio Breaker together, symbolizing their friendship
Add a photo to this gallery
Retrieved from "https://bdaman.fandom.com/wiki/Battle_B-Daman_-_Episode_02?oldid=49909"
Community content is available under CC-BY-SA unless otherwise noted.