Ice To Meet You is the fourth episode of the Battle B-Daman series. It first aired in Japan on January 26, 2004.

The episode begins with Yamato, Grey and Bull heading out to confront the challenge given to them. They go through the freezing cold blizzard ravaged lands to arrive as what Grey describes as the Delta Rock. They are separated from the rock by a giant gap in between them, Yamato uses a giant sling shot to shoot all three of them across and Yamato ends up diving head first into a gong. Grey explains that because Yamato made this mistake, Delta Rock will crumble in a certain amount of time unless they reach the top of Delta Rock. Grey suspiciously leads them into a secret passage that will lead them directly to the top in no time. Unfortunately the passage is blocked by a stone wall and all that is there to use is a tunnel system, a boulder and a giant stone B-Daman. Yamato deduces that they must load the boulder using the tunnel system into the B-Daman, they due so but it takes the strength of all three of them to finally B-Da Fire through the stone wall. After they arrive at the top, Delta Rock crumbles anyway but only so much that a large spike appears from the crater left at the top. This is then revealed to be the work of the challengers who they reveal themselves to be the Yong Fa Brothers known as Wen and Li. They use their abilities to seal Chrome Zephyr in the large spiked iceberg and challenges Yamato and Bull to a match to see who can free it first. At the start of the battle Yamato had trouble facing both of them alone and keeping his footing, but after Bull went into his Wild form he and Yamato make a plan that excludes Yamato's footing by launching him in mid air. Wen and Li figure out their plan and launch a counter attack by combining their two B-Daman Rekuso and Bakuso into Bakurekuso, ending the episode. 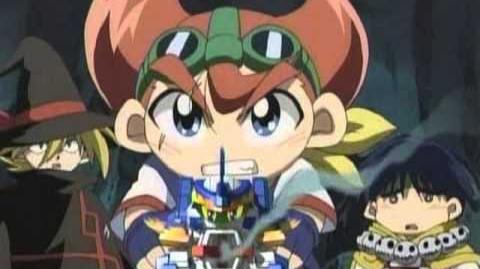 Add a photo to this gallery
Retrieved from "https://bdaman.fandom.com/wiki/Battle_B-Daman_-_Episode_04?oldid=46773"
Community content is available under CC-BY-SA unless otherwise noted.