Gray and the Blues is the fifth episode of the Battle B-Daman series. It first aired in Japan on February 02, 2004.

The episode begins with Wen and Li's Bakurekuso formed and the battle about to begin. Grey begins to think on his and Yamato's friendship through several flashbacks interrupted by Wen's plea to continue the battle. Wen, now using Bakurekuso, the battle continues with a direct hit battle. Wen fires off barrage of well aimed B-Da balls but Yamato's clumsiness allows him to slip past their attacks until they use their mini twister ability that is able to the reverse the direction of even power shots. By using twin twisters power to speed up his shot Wen launches a power shot in the shape of a dragon that nearly hits Yamato. With the tornado defense up they can't be hit so now Wen simply fires at the pillar of ice to free Chrome Zephyr and win the battle. When Yamato fires of several shot at the ice himself he is blocked by Li's seal cards much to Yamato's displeasure, saying that they are cheating. Bull now in Brave mode gives Yamato as wide server equipment for a direct hit battle. Yamato fires off a series of power shots with the equipment but to now avail, the twister defense simply just reverses his shots. But little did everyone know Yamato used the direction of the tornado defense to reverse his power shots into the ice pillar. Now desperate, the battle turns into a battle of who can free Chrome Zephyr first, Wen and Yamato rapid firing at the pillar. Both firing simultaneous shots, Chrome Zephyr is freed and they all jump to get Chrome Zephyr, but Li uses bells to tie up Yamato and Wen grabs Chrome Zephyr winning the battle. Wen and Li then tell Yamato about Grey's allegiance to the Shadow Alliance extremely to Yamato's displeasure who thinks back on all the memories he shared with Grey, then Yamato yells out that he doesn't believe them, but Grey (due to the fact they have his sister hostage) acts as if he was fooling Yamato the whole time and challenges Yamato. This angers Yamato to the point where he almost punches Grey but is unable to do so due to the friendship he thought they shared. Grey then takes off with Wen and Li after issuing a warning to Yamato, ending the episode. 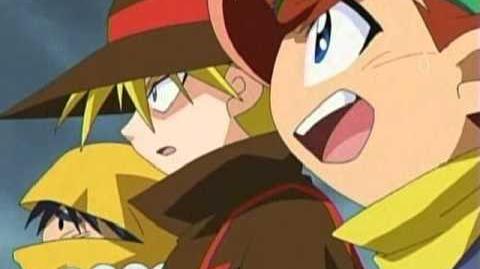 Aww you guys thank you!

Race to get Chrome Zephyr

Grey's Betrayal
Add a photo to this gallery
Retrieved from "https://bdaman.fandom.com/wiki/Battle_B-Daman_-_Episode_05?oldid=46360"
Community content is available under CC-BY-SA unless otherwise noted.