A Fistfull of B-DaBalls is the seventh episode of the Battle B-Daman series. It first aired in Japan on February 16, 2004.

The episode begins with Yamato and Terry training with Armada's moving targets. Armada interrupts the training telling them to get used to being around his home and the three of them lounge around for quite a while. While watching TV they see an add for the Winners Tournament, inspiring the two to enter. Armada immediately forbids it and tells them they are not ready. Yamato convinces Armada to give them a test to see if they are worthy. The test is revealed to be a challenge where they must knock down a stone statue of Armada consecutively because the cats will rebuild it if they stop. After countless days and nights of them firing on the statue, a storm comes in and causes major flooding that could wipe out a nearby town. Armada arrives and tells them they must complete there challenge immediately to save the town and use the statue as a dam to block the water. Yamato and Terry then knock it down and saves the town allowing them to participate in the Winners Tournament with Armada's blessing, ending the episode. 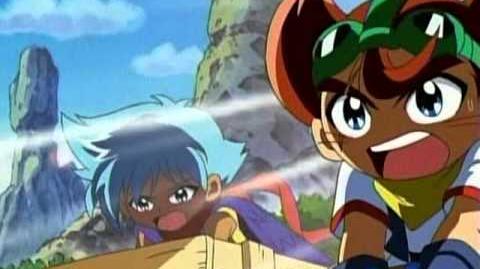 Add a photo to this gallery
Retrieved from "https://bdaman.fandom.com/wiki/Battle_B-Daman_-_Episode_07?oldid=45552"
Community content is available under CC-BY-SA unless otherwise noted.