The Bull Supremacy is the ninth episode of the Battle B-Daman series. It first aired in Japan on March 01, 2004.

The episode begins with Yamato and friends celebrating Yamato's qualification. Vinnie V then reveals that the semi-final match ups will be revealed at random. The first match is revealed to be Yamato vs an opponent Yamato didn't even think was there, Bull Borgnine to everyone's surprise. Afterwards Yamato introduces Terry to Bull and they share a good time up until Bull challenges Terry to a match. Being a friendly match Terry doesn't worry until he goes wild. The two engage in a DHB and the two battle until Bull defeats Terry winning each other's respect. Meanwhile Ababa watches the outcome from his lair and plans to use Bull to his advantage. The three wake up the next morning figuring that they were late and weren't going to make it to their first match. Once they get there, unknown to Yamato and the others Bull is hypnotized by Ababa and sent into battle, ending the episode. 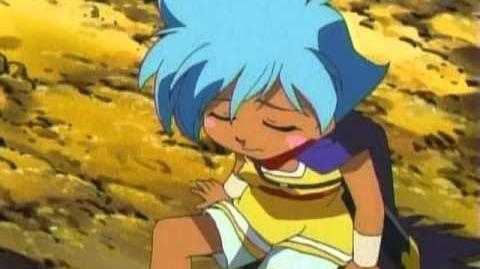 Add a photo to this gallery
Retrieved from "https://bdaman.fandom.com/wiki/Battle_B-Daman_-_Episode_09?oldid=45484"
Community content is available under CC-BY-SA unless otherwise noted.