Monkey Business is the eleventh episode of the Battle B-Daman series. It first aired in Japan on March 15, 2004.

The episode begins with Armada revealing that he created Lightning Kahn as Cobalt Blade's brother B-Daman and Enjyu earned it by completing the same challenge that Yamato and Terry had to undergo. After the argument with Enjyu ends, Yamato and the gang storm out of the stadium center and head into town where Yamato finds a B-Da Player and many children playing B-Daman. Yamato insults the player's B-Daman and the children attack Yamato until the player stops them. The player reveals himself to be a local resident B-Da Player named Berkhart along with his four brothers. The two agree to battle but unfortunately Berkhart's B-Daman shatters into pieces leaving the match without an outcome. Yamato and Berkhart's brothers share a conversation where they find out that the faulty parts for their B-Daman were given to them by an ape named Monkey Don. Yamato tracks down Monkey Don and the two battle a DHB while standing on moving pearls with bars hanging above them giving Monkey Don the immediate advantage. Berkhart then tells Yamato to pounce off the wall behind him and release a power shot powerful enough to defeat Monkey Don allowing Yamato to win the match and get their money back. Yamato and Berkhart's brothers then head out to create a new B-Daman for Berkhart. Yamato then finds a lost B-Da Ball loader and presents Berkhart with his brand new B-Daman ending the episode. 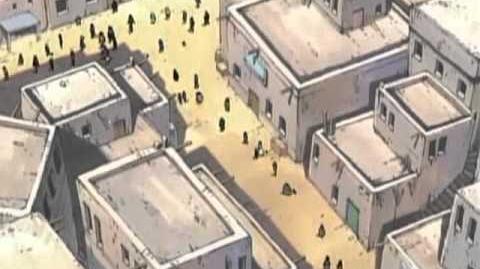 Enjyu after knocking down Armada's statue

Berkhart and his brothers

Berkhart's New B-Daman
Add a photo to this gallery
Retrieved from "https://bdaman.fandom.com/wiki/Battle_B-Daman_-_Episode_11?oldid=49918"
Community content is available under CC-BY-SA unless otherwise noted.