Twisted Sister Act is the twenty-fourth episode of the Battle B-Daman series. It first aired in Japan on June 14, 2004.

Yamato and company break into the Shadow Alliance's base hoping to save Liena, but instead it leads to a Liena/Grey showdown. Who will prevail? 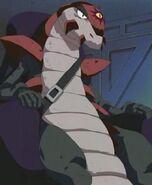 Add a photo to this gallery
Retrieved from "https://bdaman.fandom.com/wiki/Battle_B-Daman_-_Episode_24?oldid=45054"
Community content is available under CC-BY-SA unless otherwise noted.