That's No B-Daman, That's My Sister is the twenty-fifth episode of the Battle B-Daman series. It first aired in Japan on June 21, 2004.

With Yamato and Liena advancing, Cain and some of the others from the Battle 5 tournament return to offer their congratulations, but do they really want to congratulate them, or do they have something else sinister planned? Can Yamato battle some sense into them?

Battle b-daman ep 25 thats no b-daman, thats my sister (english)
Add a photo to this gallery 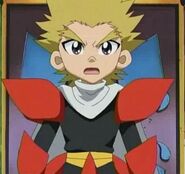 Add a photo to this gallery
Retrieved from "https://bdaman.fandom.com/wiki/Battle_B-Daman_-_Episode_25?oldid=49933"
Community content is available under CC-BY-SA unless otherwise noted.