Hurry Up and Wait is the twenty-ninth episode of the Battle B-Daman series. It first aired in Japan on July 19, 2004.

It's the festival night before the day of the final round of the Winners Tournament. With the Shadow Alliance still after Cobalt Saber, what tricks does Enjyu have up his sleeve to ensure his victory over Yamato? 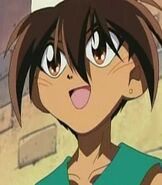 Enjyu wins the first round of his match with Yamato

Yamato loses the first round of his match with Enjyu
Add a photo to this gallery
Retrieved from "https://bdaman.fandom.com/wiki/Battle_B-Daman_-_Episode_29?oldid=49937"
Community content is available under CC-BY-SA unless otherwise noted.