They Call Me Yamato is the forty-first episode of the Battle B-Daman series. It first aired in Japan on October 11, 2004.

The gang makes it to a resort island where Yamato learns how to channel more power behind Cobalt Saber's power blast. When Armada learns of this, he figures out a way to test Yamato's new strength at the Meowtra temple, but can Yamato pass the test? 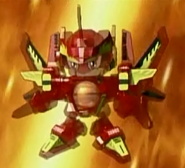 Add a photo to this gallery
Retrieved from "https://bdaman.fandom.com/wiki/Battle_B-Daman_-_Episode_41?oldid=50080"
Community content is available under CC-BY-SA unless otherwise noted.