B-DaBreakdown Part 1 is the forty-fifth episode of the Battle B-Daman series. It first aired in Japan on November 08, 2004.

Joshua seeks out Yamato and asks him to help unlock Cain's true heart, but is he leading the gang into a trap, or does he really want Cain to be free hearted again? Also Wen decides how to free Li, but can he get by the members of the Neo Shadow Alliance?

Younger Cain being abused by his father Alex Ruth 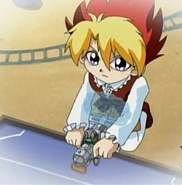 Younger Cain in a Flashback

Add a photo to this gallery
Retrieved from "https://bdaman.fandom.com/wiki/Battle_B-Daman_-_Episode_45?oldid=49953"
Community content is available under CC-BY-SA unless otherwise noted.