Start a Wiki
Battle Phoenix (Japanese: バトルフェニックス, Battoru Fenikkusu) is a Power-Type B-Daman, and the first in the Plug-In System.

It was released in Japan in March 1998, and sold for 780円. It was the third B-Daman of Tamago Tosaka used in the anime (fourth in the manga).

A re-design of the original Fighting Phoenix's head with the Plug-In System logo, the eyebrow-like designs on either side of the logo are now flame-shaped, and on the sides of the PI Head are stickers of a phoenix symbol; one with the number #05, and the other with Tamago's name on it. It also features those famous green anime-eyes in the gray visor.

The PI Arms are white with a blue around each wrist. It also features two Cannon Suspension Shoulders, which consists of two orange trigger pads supported by springs on metal rods, forming a pair of Cannon Arms. The purpose of the Cannon Arm is to squeeze in the upper Hold Parts of the NEW Delta System to build up pressure for firing stronger power shots.

The PI Foot is designed like Fighting Phoenix's Feet Part, blue-and-white in color, with stickers depicting a phoenix. It also has a yellow locking latch.

The NEW Delta System is a PI Frame featuring a set of three Hold Parts in a triangular "Delta" formation, similar to its predecessor. On the upper Hold Parts are two orange rollers, in addition to that familiar black rubber strip on the bottom Hold Part. The rollers helps to enhance the forward spin of the fired marble.

Battle Phoenix comes stock with a standard Circle Trigger, which has a circular pad on the end of the plunger.

The plastic on this, along with most other B-Daman toys in the Super B-Daman toyline may have become brittle with age. Attempting to use the Cannon Arm, may cause one both of the two trigger pads of the mechanism to break off after firing, or in less severe cases, cause strain marks on the plastic.

During the JBA tournament, when Fighting Phoenix was destroyed by Ijūin Atsumasa with his König Cerberus, Tamago's friends from school give him Battle Phoenix to allow him to continue on.

In the finals, just as Ijūin had managed to defeat Cerer, finally gaining his revenge on him, he went up against Tamago. The power of Battle Phoenix easily overpowered König Cerberus' double shots. 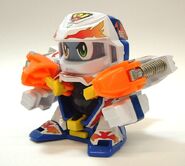 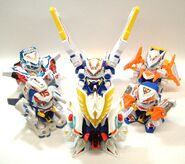 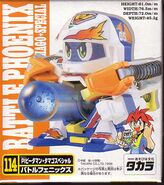 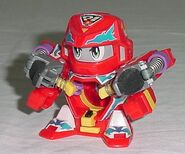 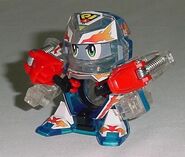 Retrieved from "https://bdaman.fandom.com/wiki/Battle_Phoenix?oldid=50056"
Community content is available under CC-BY-SA unless otherwise noted.