Biarce is a member of the Neo Shadow Alliance. His B-Daman is Mega Diabros.

Biarce has short, dark blue hair and bright red eyes. He wears strange, almost priest-like robes with red runes on them. Biarce is very cynical towards those he does not like, for example Enjyu and Cain. To people like Marda B, he is very respectful. He seems to have mood swings, snapping at Enjyu and Cain one minute, then turning to speak politely to Marda B.

Biarce is first seen when Marda B creates the Neo Shadow Alliance. Biarce is seen again when Marda B announces his plan. Biarce begins to go around turning hundreds of B-Da players to stone including Shegen and almost everyone from Wygene. While in Wygene, he faces Sly to finish off the town and all of its B-Da Players. He defeats Sly, ruthlessly turning him and all of his students to stone.

He is later mentioned by Vinnie V after he attacked the IBA headquarters. He is caught and challenged by Yamato, who he outclasses by using his speed and the power of his captured B-Da Spirits. He reveals that Mega Diabros does all the work by using the energy Biarce siphons from defeated B-Da Players. He completely overwhelms Yamato, defeating him and turning him to stone.

But not long after, Mega Diabros begins to overload and returns Yamato's spirit to his body to keep from overloading, afterwards Biarce leaves the battlefield. Biarce is disturbed when Enjyu steals B-Energy from he and Marda B, he finds Enjyu and battles him to a no contest when Enjyu runs away.

Biarce and Enjyu are next seen stopping Yamato and Terry confronting Marda B. When Biarce leaves the lair, Terry tells Yamato to pursue him while Terry holds off Enjyu. Biarce is confronted by Yamato in Marda B's dimension. Here it is discovered that Biarce is simply an entity for Marda B to exist from because he has no body. Biarce (Marda B) then explains that the all the evil that crossed Yamato's path was a setup for the greatest B-Da Battle ever. Biarce and Marda B then combine themselves to create Marda Biarce.

It is unknown what became of Biarce afterwards, although simply being an entity for Marda B to exist may suggest that he ceases to exist.

Biarce was an old student of Ababa.

Biarce is the lead of Team Junk, a team made up of players who were banned from official tournaments. He first appeared when Enjyu was training by himself in Volume 6. He extended an invitation to him to the Master's Winners Tournament, but was rejected. Biarce ended up having to prove that he was an amazing player, and used Mega Diabros to knock every leaf off the trees without touching the branches.

Biarce then shows up at the Master's Winners Tournament, making to the Final Match of Block E, where he faces Terry. When they shook hands, Terry discovered that Biarce's hands were as cold as ice. They battled through Target shooting, and Biarce attempted to shoot Terry at his thumbs to stop him from shooting instead of the targets. However, Terry had Wing Sword hidden behind is Wing Ninja, and was able to shoot without his thumbs. As Terry was about to win, Biarce made a final move which shot down all of Terry's targets at once. As soon as the match was over, Blocks E, F, and G broke down and Biarce declared themselves to be Team Junk and challenged Team Yamato.

When Kiba lost his match, Biarce punished him for not winning. He declared that he was looking for the Legend Stones to acquire power, and made use of Haja, Gunnos, Aqulas, Kiba, and Jinbee to reach his goal. As it aggravated Yamato, they battled. Yamato won as Biarce got spiked, but he made use of a technique he learnt from Ababa, he got into Aqulas' body, making him able to combine Mega Diabros and Revolver Hades.

Because Yamato made use of everyone's strike shots, Biarce lost once again. However, he was still in Aqulas' body as Rai and Mei approached him, offering him to join them in the final hunt of the Legend Stones.

Biarce makes a brief appearance in the Fire Spirits game. He can be encountered when one finishes the game. 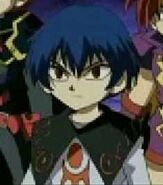 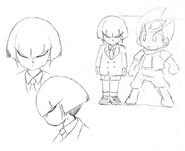 Add a photo to this gallery
Retrieved from "https://bdaman.fandom.com/wiki/Biarce?oldid=48899"
Community content is available under CC-BY-SA unless otherwise noted.