Blitz Garuda (Japanese: ブリッツガルーダ, Burittsu Garuuda) is a Rapid Fire/Rush-Type 3 Block Gear System B-Daman belonging to Konta Tsukino. It was released in Japan in December 29, 2005, and sold for 840円.

Garuda has a yellow colored body, with two white Hold Parts in its core. On the Hold Parts are a pair of rollers for smooth, rapid-fire shots.

Trigger Grip B is blue with white parts and a trigger, along with a gold-colored arrowhead-like design formed from three smaller ones.

This Barrel Block is blue, with a design similar to Magnum Ifrit's .67 Short Barrel, but rounded and is a mid-length component.

Blitz Garuda is first used by Konta Tsukino, when he helped Hitto train for his rematch with Hinzo. Blitz Gaurda was next used to rescue a girl's plush bunny from flying too high on a balloon. This showed his and Blitz Garuda's great accuracy, because Hitto and Magnum Ifrit could not hit it with an entire clip of marbles. Blitz Garuda and Magnum Ifrit are teamed up to defeat Team Black Horse, with the help of Kodoh Kuraki and his Rave Pegasus. 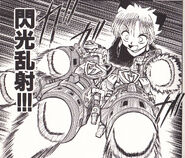 Blitz Machine Gun.
Add a photo to this gallery
Retrieved from "https://bdaman.fandom.com/wiki/Blitz_Garuda?oldid=46598"
Community content is available under CC-BY-SA unless otherwise noted.