Start a Wiki
Break Ogre (Japanese: ブレイクオーガ, Bureikuōga, Breakogre)  is Gunnos' second B-Daman in the Blaster Core System, after Gun Breaker, and is a Power Type. It was released in Japan in February 2005, and sold for 819円. It comes with a pack-in Metal Shot.

Break Ogre features a metallic gray skeleton, with the same shade of color as Mega Diabros.

Despite the name, the Ogre Visor is designed like the head of an elephant. It has two white tusk-like pieces, on the front, along with a blue visor, red eye designs, camoflage on the ears, and an elephant trunk curving backwards. On the top of the head sits a small white bit that the elephant truck curves towards.

Each Break Shoulder armor piece is broad, reaching up to 1/3 the height of the Ogre Visor's elephant ears, also featuring camo stickers with Gunnos' name on them. On the sides, are elephant tusks that reach up a bit higher.

The Break Arm pieces are white, with two claws and stickers forming a vented design on each arm. They serve no purpose, other than aesthetics.

The Foot Armor of Break Ogre, each Ogre Foot piece is green-blue with a two-toed design with bits resembling knee guards.

This spring-loaded accessory, when equipped, adds an extension to the Core's Trigger, increasing its length to 90mm. To prevent wobbling, the Power Trigger features a small gear system that ensures that it presses smoothly, and transfers kinetic energy over a shorter space, increasing the momentum of the shot. It also features a small fin on its underside for stability, as well as two small ledges on the back, allowing it to be used as a one-handed grip.

Like Cobalt Saber Fire, Break Ogre has a Drive Core in which case is of a gray coloration with red Hold Parts, Trigger, and a white Drive Strip.

Break Ogre debuts in Battle B-Daman when Gunnos saves the people of a B-Da Crafting town. Out of gratefulness they give them their prized and newly-crafted B-Daman; Break Ogre. After realizing that this was actually a carved stone prototype, Gunnos returns it and leaves. He would soon be approached by a gang bent on revenge and would be forced with his back against the wall. With the help of the villagers and Yamato, Gunnos combines his Metal Shot and the stone prototype to create an actual Break Ogre. He would then invent his new special move, the "Metallic Stamp" to win the match. Gunnos and Yamato would next head to the voice of the wind, in search for another Strike Shot. There, they found a new challenge, Aqulas and his new found Revolver Hades. Gunnos would challenge Aqulas to prove Break Ogre's power. Gunnos took what seemed to be the advantage with Break Ogre's incredible power, but was defeated due to Aqulas' overwhelming strategic genius and the Stealth Shot's cloaking ability.

Break Ogre's debut in the form of its stone prototype

Break Ogre in the Anime 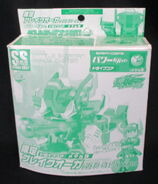