Bull Borgnine is a main character in Battle B-Daman. His B-Daman is Helio Breaker.

Bull has black hair and black eyes. He wears a yellow poncho, in which he keeps spare B-Daman parts. In his confident side he has black hair, while in his wild side he has spiky red hair. Bull has a three-way split personality: The calm and naive side, the confident side, and the wild side that appears when he presents his B-Daman, Helio Breaker. This dark side remains until the end of a B-DaBattle, and can enter a berserker state where he's practically invincible. When Bull returns to his natural state, he has no memory of what he just did.

Bull first appeared in calm form as he makes a mysterious appearance in Mie's cafe. Next he is seen in his Brave form challenging Yamato but is foiled by Gray. In his calm form he heads up to the mountain where Gray practices and this is where Yamato and Gray figure out that Bull has several forms. Bull is seen on several occasions with Yamato and Gray. He would also display his power scoring a perfect 100 in battle hammer. Next B-Da Battle would not be until Wen and Li challenge Yamato, Brave and Wild Bull would help Yamato but to no avail as they lose the match. After walking home in defeat with Yamato, the two part ways. Bull then returns at the IBA Winners Tournament where he qualifies off-screen. But this is revealed when he is to face Yamato in the first round. He then meets up with Mie, Armada, Terry and Yamato in the battler's dorm, and rejoins Yamato's group.

During this reunion Yamato suggests that Terry and Bull battle to become friends. Bull's superior equipment and power allow him to win the battle by using his B-Da Ball Loader, and the two succeed in becoming friends. The first round of the Semi-Finals begin with Bull facing Yamato. But little does everyone know Bull is under Ababa's hypnosis control. After losing the match Bull is set free but is surprised by realizing he has lost and has been eliminated from the tournament.

He is next scene on several occasion's but does not play an important role until Yamato and the gang look for jobs and he saves Miss Karat from the "Dark" and challenges Joe in the Five Field Challenge's Phoenix Stage. Bull and Joe go neck n' neck for a long time due to their equality in strength but Bull gets a serious disadvantage due to quick fatigue because he failed to eat before accepting the challenge but thanks to Miss Karat interrupting and feeding him dinner, he regains his strength but this becomes a disadvantage as he destroys the rail hitting the B-Daman, losing the match. He is next seen conflicted within his three forms between how to handle Miss Karat's interruptions as she is always trying to force her help upon Bull. Wild says that he should stay away but Brave believes that she is helping and should embrace her. After several "Mind Meetings" Bull decides to let Miss Karat tag along with him, without embracing or ignoring her. When he returns back to the group it is decided that he will battle in the next Five Field Challenge. He faces off against Joshua, he has trouble at first but he switches over to calm form and defeats Joshua. After Mr. Watt party he is captured by Mr. Watt and forced into brave mode to try and get him to join his family. Bull is saved by Miss Karat and the gang. While searching for Gray's sister Liena he along with Terry challenge Goldo, a merciless Shadow Alliance trainer. They defeat Goldo by combining the strengths of their strike shots.

Birth of a Mechanic

After the gang returns to Cowtune from the tournament, the town is attacked by a ruthless gang called the Longhorn Brothers and Bull had previously broken Cobalt Saber when he tried to fix it up. Feeling responsible he challenged the gang leader named News and beat him using his strike shot "Helio Blade". After their battle News and his brother Salz reveal to have third eyes much like Ababa showing their rank in the Shadow Alliance. After a huge raise in News' power the two have a rematch and Bull is severely defeated and Helio Breaker is destroyed. Back at Yamato's home, with new bravery and intelligence, Bull (Brave) aspires to figure out a way to fix Cobalt Saber and make it even better. But back in his lazy calm form Bull messes up Chrome Zephyr and Wing Ninja as well on accident, but luckily Gray and Terry easily put them back together. When Bull tells Gray that his Chrome Zephyr is no match for News, Gray becomes very angry and heavily insults Bull telling him he didn't take care of Helio Breaker. This actually encourages Bull and with the help of Armada Bull is able to fix Cobalt Saber and even create Chrome Raven. Later when the group arrives in Lycan Bull works with Mr. Rowbee to create King Rekuso and King Bakuso. Bull travels with along with the group as their mechanic, repairing B-Daman after loses like when Yamato lost to Biarce and Gray, Terry and Wen to Cain McDonnell. After all that is over the group heads to Neon City, the last known place that hasn't been captured by the Neo Shadow Alliance.

Bull is chosen by Armada to lead the Neon City Army, and is given Armada's personal B-Daman to do so, the Armada Special (which has a slight resemblance to Helio Breaker). When Marda B's Harrier reaches Neon City Bull recites a encouragement speech naming this day "B-Daman Day". But after all his encouragement and preparation for this battle, Marda B's Harrier uses a high density beam to destroy Neon City and turn Bull and his entire army to stone. After Yamato and the other's defeat Marda Biarce and the Neo Shadow Alliance, Bull and Neon City citizens are set free from their stone imprisonment. Bull is last seen with every other character in the series saying their goodbyes while standing in front of Hox's picture. 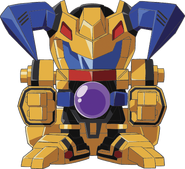 Bull's Meetings of Me