Cammogale is a Rapid Fire/Accuracy-Type Zero System B-Daman, and a Hasbro-exclusive variant of Dragogale. It was released in the Battle B-Daman toyline internationally in 2005 by Hasbro. It was released only in the DHB line and features, as its name suggests, camoflauge recolors of Dragogale's armor.

Cammogale has a black IBA Body, with no sticker for its visor area.

The Drago Visor is green, in the design of a Western dragon-head. It also has stickers for a pair of aquamarine eye designs and a small black fin.

These Shoulder Armor pieces each feature a black fin like the one on the Drago Visor.

The Drago Claws are of a three-fingered design, meant to resemble the claws of a dragon.

Like with most IBA Body Cores, they're not interchangeable. 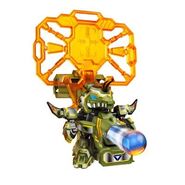 DHB Mode
Add a photo to this gallery

Retrieved from "https://bdaman.fandom.com/wiki/Cammogale?oldid=50165"
Community content is available under CC-BY-SA unless otherwise noted.