Chrome Raven Cyclone (Japanese: クロムレヴァンサイクロン, Kuromu Revaan Saikuronu, Chrome Levan Cyclone) is a Control-Type (Rapid Fire-Type in Japan) B-Daman, and the third B-Daman owned by Grey Michael Vincent. It was released in Japan in January 2005, and sold for 1029円, along with a pack-in Speed Shot.

A re-design of the previous Raven Visor, this one features a red line visor instead of the yellow, along with a series of new designs.

This simple piece mounts above the Core, and in front of the mouthplate area of the head.

Taking the place of the older One Hand Wing is an all-new One Hand Shoulder, which features a grip handle for one-handed maneuvering and firing, allowing you to use a free hand for reloading. The Shield Shoulder is a removable piece that can be used for target practice, similar to Proto One's Target Shield.

These pieces function similarly to Cobalt Saber Fire's Fire Shields, but of a streamlined design. They are designed to resemble the foot part of Chrome Zephyr.

Essentially a re-design of the original Chrome Raven's Chrome Foot, with more of a boot-like appearance.

An upgraded variation of the Roller Core, featuring a Delta-style Hold Part layout with a roller on each one, with a specialty-sized NSK ball bearing as the bottom roller, for smooth, powerful, rapid-fire bursts of B-Dama.

Grey would use Chrome Raven Cyclone again to challenge Enjyu, in order to stop him from participating in underground B-DaBattles. In the first round, Enjyu won due to his advanced knowledge of the cage. In the second round, Grey used his Speed Shot in the Cyclone Sonic move to win. In the third and final match, Grey almost uses his Speed Shot, but is interrupted when Enjyu's rage explodes and hits the bar past Grey's zone. Even though Grey was defeated, Enjyu severed his ties with the underground, making the former's fight worthwhile. 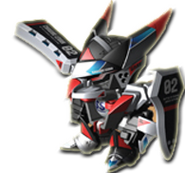 Chrome Raven Cyclone In the Anime 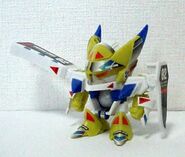