Cobalt Blade (Japanese: コバルトブレード, Kobaruto Bureedo) is a Power-Type B-Daman; the successor of Cobalt Sword. It uses the Zero System and was first released in Japan on July 17th, 2003 for 680円, while receiving an international release in 2005, selling for $6.99 USD. It also had an early release at the 2003 Summer World Hobby Fair in Japan on June 21st, 2003.

It appears in the anime and manga series, Battle B-Daman as Yamato Delgado's first B-Daman in the anime but was his second in the manga; following Cobalt Sword.

As a user of the Zero System, Cobalt Blade uses a white IBA Body skeleton.

Cobalt Visor is compromised of three pieces; two form the major parts of the helm, that are placed around the visor piece to form the complete helm. A square-like hole can be found at the centre and provides the space for the signature horn piece for the "Cobalt" family of B-Daman. Just like its predecessor, the horn functions as improving one's accuracy when they are about to fire B-DaBalls; known as the Cobalt Power Blade (Also known in Japan as the Blade Sight). Moving the B-Daman itself will change direction of the horn, changing sight as well. It provides a general "lock-on" system against other B-Daman or objects.

Hot-rod decals can be placed on the blue Helmet, while another green sticker is made to fit-in with the visor; offering anime-esque eyes in the form of a black pupil, a blue iris and a yellow sclera. It is worth noting that Cobalt Blade is the first of the Cobalt series to use these eyes, and this would carry over to its successors later on in the series. However, Cobalt Blade is not the first B-Daman to have anime eyes in its visor, with Super B-Daman's Fighting Phoenix having the distinction.

The Cobalt Power Wing (Cobalt Wing in the Japanese version) is the primary feature of Cobalt Blade. This pieces sits on the back-end of the Hold Parts, with pegs inside the two little holes. As a result, this prevents the back of the Hold Parts from flexing and increasing stress in order to increase one's firing power. It is this piece that serves as Cobalt Blade's source of power; a significant decrease in firing power can be noted if Cobalt Blade is used without this wing. Many other Power Type B-Daman utilize this mechanism but using different looking parts.

In addition, more hot-rod flame decals can be placed on each Wing with "ZERO" written on them.

The Cobalt Pad is quite basic and is placed on the Zero Shoulders of the skeleton. Their only actual use is to provide some weight, extra surface areas to rest your hands on and for cosmetic purposes. Once again, hot-rod decals can be placed on each blue Shoulder Armor with different words depending on the shoulder; "YAMATO·D" (representing its owner, Yamato) on the right and "COBALT BLADE" on its left.

The Cobalt Foot provides additional stability to the Zero Feet of the skeleton. This can be useful when recoil is a factor or to withstand and support magazines and other such accessories.

Due to the way that the Zero System was designed, the Core itself is a non-removable part of the IBA Body and thus, could not be customized with other Cores; this would change in the Blaster Core System, however. Cobalt Blade's Core is quite basic with no gimmick or specialization of it. Despite this, the Core can be made stronger when one attaches the Cobalt Power Wing at the back of the B-Daman. Its Basic Hold Parts and Basic Trigger are of a red coloration.

Cobalt Blade was created by Armada, a brilliant inventor and a B-DaMaster, after the theft of the Zero System's blueprints, along with a prototype skeleton, by the Shadow Alliance. Cobalt Blade was then later given to Yamato by the B-DaMage. On Yamato's eleventh birthday, Grey came to Yamato's home in search of Cobalt Blade, which was hidden by Mie Delgado in one of cafe's walls, hoping that she would protect Yamato by doing this. Yamato then unlocked Cobalt Blade's true power when he used it to battle Grey, adding the eyes and flame designs through the use of his B-DaPower. Yamato would continue to unlock Cobalt Blade's abilities such as its power shots, rapid-fire capabilities, up until to when he unlocked its Cobalt Power Blast technique against Castieo. Cobalt Blade unlocks its next finishing move "Spinning Cobalt Power Blast" when Yamato defeats Liena. Sadly, Cobalt Blade's time was imminent as a hidden evil approaches. Cain McDonnell betrayed Yamato and ended up nearly destroying Cobalt Blade, but the legendary B-Daman would not die there. Cobalt Blade's energy remained within its horn, and this piece is used for Cobalt Blade's evolution as Cobalt Saber.

In the Manga, Cobalt Blade was only made after Cobalt Sword was broken during Yamato's attempt to rescue Liena Grace Vincent. Yamato uses Cobalt Blade through the Semi-Finals and the Finals of the Winner's Tournament. Cobalt Blade breaks after Joshua's constant attempts to break it during their battle on, Cain's orders, were finally achieved.

Cobalt Power Blast: This is Cobalt Blade's generally-used special attack. When it is used, Cobalt Blade fires a flaming B-DaBall. The friction of the battlefield and the increased firing strength provided by the Cobalt Power Wing is what enables the use of this attack.

Spinning Cobalt Power Blast: Much like the original Power Blast but more powerful. This shot is achieved by everything required from the first power attack as well as Yamato spinning around on the spot, adding extra power to the shot through an increase in energy kinetic energy which comes from his given force centripetal force. 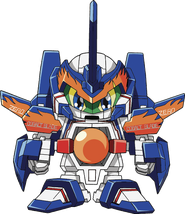 Cobalt Blade in the anime

Cobalt Blade about to use the Cobalt Power Blast

Cobalt Blade's near destruction
Add a photo to this gallery 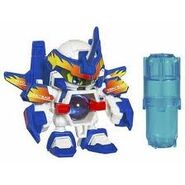 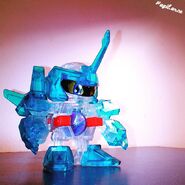 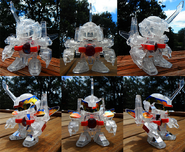 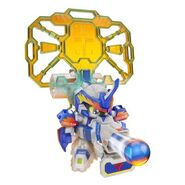 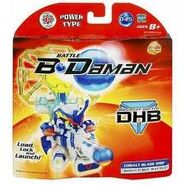 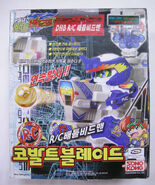 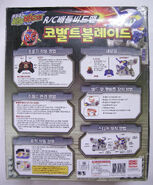 Sonokong Cobalt Blade RC Ver. back of the box