Cobalt Blaster (Japanese: コバルトブラスター, Kobaruto Burasutaa) is a Power-Type B-Daman; the evolution of Cobalt Saber Fire, and the first B-Daman to use the Cartridge System. It was only released in Japan as a Starter on July 21, 2005 for 800円, and comes packaged with the Stealth Drive Shot.

It is one of the only six B-Daman that used the Cartridge System, with the others being Gatling Hades, Chrome Harrier, Variable Kaiser, Meteor Dragon, and Comet Dragon.

As the first Cartridge System B-Daman, Cobalt Blaster's Cartridge Helmet is separate from the body and is placed manually; like with the Blaster Core System. Of course, this Cartridge Helmet, the Blaster Sight, does not fail to resemble the previous Cobalt models. Complete with its signature, blue horn for aiming and some hot-rod-flame stickers with "BATTLE B-DAMAN" around the piece, it is finalized with its blue-eye decals; albeit emulating a rather serious outlook when compared to its previous iterations.

Cobalt Blaster's Hold Power Arms feature red, ring-like Cartridge holders used for manually holding said Cartridge when not in use. They can be folded off to the side as another means of storage. Alongside this however, is the unique feature of these Arms. Similar to Helio Breaker from the Zero System, when these Arms are placed on the figure they press and push against the Hold Parts of the Cartridge Body to give an increase in strength to this Power-Type B-Daman.

The Cartridge Foot of this B-Daman are different from the Feet of the previous Zero and Blaster Core Systems, in which this part is now one-piece; meaning that it lost articulation ability, but strengthened stability. Connected at the front of the B-Daman, a separate, blue holding-piece can be placed for extra stablilization. The reason for all of this added stability, in this piece, the Balance Foot, is because the Cartridge Triggers can potentially cause their B-Daman to lose balance with the floor of the playing field.

Cobalt Blaster includes a Cartridge Trigger that can be changed between two modes by means of a simple sliding mechanism: Single or Cartridge Shot. As its name suggests, the Single Shot Mode can only fire one B-Dama at a time (like most B-Daman in the older Zero and Blaster Core Systems). The Cartridge Shot Mode, however, allows one to shoot two B-Dama (Whether a standard one and a Strike Shot and vice-versa) at a time by means of the bullet casing-like Cartridge; great for a small emulation of Rapid Fire-Type B-Daman or a surprise attack. However, this gimmick still shares the same weakness as Rapid Fire-Types, in which accuracy is hindered as a result.

The Trigger itself is quite a long piece, which may slow down the rate of firing, but the length is necessary for Cartridge Shots.

Cobalt Blaster can be bought either as a Starter or in a Special Set, which includes a Double Grip for Cobalt Blaster, Cartridge System Barrel and Magazine, DHB Unit, six glass marbles, two Cartridges, six Strike Shots (two Metal, one Drive, one Speed, one Stealth and one Stealth Drive), and three target pins. By equipping all these parts, Cobalt Blaster has Power, Accuracy, Rapid Fire, Control, and Balance, so it won't fall over when firing B-DaBalls. 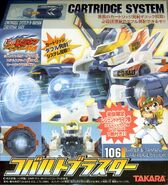 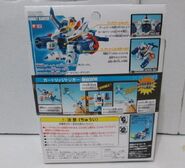 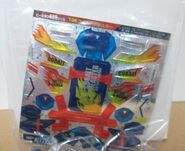 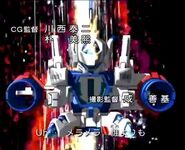 Add a photo to this gallery
Retrieved from "https://bdaman.fandom.com/wiki/Cobalt_Blaster?oldid=50111"
Community content is available under CC-BY-SA unless otherwise noted.