Cobalt Blaster Drive Cannon (Japanese: コバルトブラスタードライブキャノン, Kobarutoburasutādoraibukyanon) is a B-Daman in the Digital B-Daman IR Control System, belonging to Yamato Delgado in Battle B-Daman: Fire Spirits!. It was released in November 2005 in Japan, and sold for 2940円.

IR Control System or RC b-daman is controlled by using the infared remote control. It requires a total of 5 AAA batteries ( 3 in b-daman/ 2 in remote). Both place require a screwdriver to open. Both had a built in channel that can be switch into 1 or 2 which require same channel hertz for the b-daman to working. A sound is pop out whenever you change channel and turn it on.

The remote control has 5 pads button :

Fire : Top right ( A sound will pop out whenever you shoot) you can't shoot while moving.

Reverse Rotation Mode : Autofire + Left/Right ( you can only reverse in a rotation while moving backward to the left/right)

Battling againts the other opponents requires you to set different infared channel on remote and b-daman to avoid over misscontrolled of each other b-daman.

When the foot is hitted, a warning sound will pop out. The second time it is hit, the b-daman is turned off meaning you have lost the battle.

The front part of the core can be equipped with 110-Cartridge System Barrel.

Due to being a remote-controlled B-Daman using motorized parts for both movement and firing B-DaMarbles, this B-Daman is illegal for tournament play.

This b-daman is run by wired engine to auto push the trigger and wheel with rubber strip to enchance immobilization.

The only part that made from rubber is the horn and each side cannon and fin to reduce collision impact.

The box came with target that can be cut out. 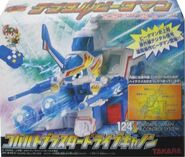 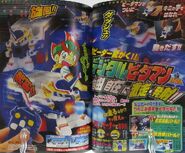 CoroCoro Magazine
Add a photo to this gallery

Retrieved from "https://bdaman.fandom.com/wiki/Cobalt_Blaster_Drive_Cannon?oldid=47249"
Community content is available under CC-BY-SA unless otherwise noted.