Cobalt Saber Fire (Japanese: コバルトセイバーファイヤー, Kobaruto Seibaa Faiyaa) is a Power-Type Blaster Core System B-Daman belonging to Yamato Delgado. It was released in Japan on December 11th, 2004 as part of the Battle B-Daman toyline, and sold for 819円, also coming packaged with the Drive Shot    (Note:The status of this B-Daman is based on the game "B-Daman Fire Spirits GBA")

Cobalt Saber Fire, like its predecessor, features a white skeleton.

The Fire Visor is similar to the previous Saber Visor, but with new designs, and a pair of small, red horns jutting rearward and upwards. The Fire Sight is an upgraded version of the Saber Sight, with a red and white design and a longer length.

The Fire Shield gauntlets serve the same purpose as the original Gun Shields, but appear to be usable for gripping the B-Daman by its arms.

Another redesign of the Cobalt Foot made for this B-Daman, this time featuring white stickers with flame designs and the #02 in the middle along red lines.

The ultimate evolution of the Cobalt Power Wing, the Fire Wings feature a pair of hinged outer wing units with spring suspension mechanisms on them. When the outer wings are folded in, it is in "Level 1" mode. In "Level 2" mode, they are folded outward, with the spring suspension units squeezing in the upper Hold Parts of the Core for an extra boost of power. The inner wings can also be used like grip handles, too.

NOTE: The Level 2 mode can only work with the Drive or Delta Cores.

An update to the Delta Core, the Drive Core features a rubber Drive Strip on its bottom Hold Part. When a B-Dama is fired from this Core, the rubber strip gives it a forward spin, as it knocks down a target powerfully. It is of a white coloration with baby-blue Hold Parts. When matched with the Drive Shot, friction is created for a fast and powerful shot. 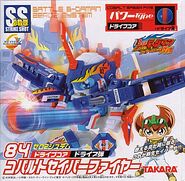 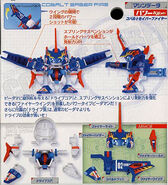 Equipped with the DHB Core.

Strike Magnum.
Add a photo to this gallery

Cobalt Foot.
Add a photo to this gallery

Retrieved from "https://bdaman.fandom.com/wiki/Cobalt_Saber_Fire?oldid=47013"
Community content is available under CC-BY-SA unless otherwise noted.