Cobalt Sword (Japanese: コバルトソード, Kobarutosōdo) is a Power-Type DHB System B-Daman and the first-ever release in the Battle B-Daman franchise, which started in Japan on March 21st, 2002, and it sold for 880円. It also had an early release in the 2002 Winter World Hobby Fair on January 26th, 2002. It is Yamato Delgado's first B-Daman in the manga. It is the "younger brother" of Cobalt Geist, the original form of Enjyu's Shred Kaiser.

Cobalt Sword's Head features a semi-translucent green canopy with a cyan crest with gradient yellow/orange/red flames on it, along with a large, blade-like horn extending from it. That horn is the predecessor of the Cobalt Power Blade.

The Armor is blue with a white sticker and a smaller red one at the front, in addition with even smaller white stickers along with flame stickers on the sides.

Each Arm is blue with a small white sticker on the forehand, along with a flat head screw design on the elbow. Also, the shoulder area is spiking backwards, as well.

Cobalt Sword has a red Trigger with a blue base that has two wings pointing downwards.

The Core Part is basic at best, featuring two Hold Parts, much like the skeletons in the later Zero System. It has a red ejection port, over which you can attach a DHB Attack Point.

Yamato owned Cobalt Sword prior to the plot in the Manga. It was shown that it was taken away by a gigantic bird right at the beginning, before he took it back.

Cobalt Sword lasted until past the quarterfinals of the Winners Tournament. It was broken due to Yamato exerting too much force onto it while trying to do a squeeze attack against a mind-controlled Liena to save her. It was then succeeded by Cobalt Blade for the remaining matches. 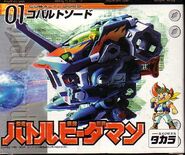 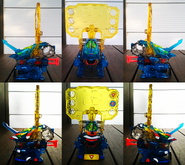 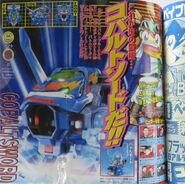 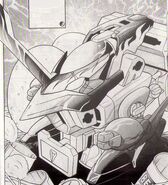 Cobalt Sword in the Manga.
Add a photo to this gallery

Retrieved from "https://bdaman.fandom.com/wiki/Cobalt_Sword?oldid=50150"
Community content is available under CC-BY-SA unless otherwise noted.