Combat Phoenix (Japanese: コンバットフェニックス, Konbatto Fenikkusu) is a Power-Type B-Daman, and the first B-Daman in the PI-EX System. It was released on July 17th, 1999 in Japan for 680円. It is the fifth B-Daman owned by Tamago Tosaka in the Super B-Daman manga.

Combat Phoenix has a dark gray EX Frame, to which the other parts of the B-Daman can be attached.

The EX Head is a redesign of the original Battle Phoenix's PI Head, in which the #05 is no longer there, along with a new phoenix design on top, and a spoiler with "PHOENIX" on it, in addition to two-toned blue designs and the famous gray visor with green anime-eyes. On the sides reads "TAMAGO", its owner's name in the anime.

Combat Phoenix has a pair of EX Spring Arms, which increases the B-Daman's power by squeezing in the Hold Parts, that which works only with the Astal System EX Core (see below). Attachable and removable via Philips screwdriver.

The Astral System is an EX Core with a set of five Hold Parts in a formation like a five-pointed star, hence the name. On one of the Hold Parts is a black, rubber Drive Strip, which gives any B-Dama fired from this B-Daman a forward spin, to knock down targets powerfully. To reduce any unwanted friction, four of the Hold Parts each has a groove cut into the rear area.

The Stabilize Trigger, which attaches to the rear of the EX Frame, has a wide lip with a rubber covering that allows the user to use two thumbs to push it to fire B-Dama. This piece also has a guide rail for easy loading.

They are two white pieces with two-toned blue designs.

Combat Phoenix is the upgraded form of Battle Phoenix, created by Dr. Tamano. However, it was at 50% completion at the time when Tamago started using it. It would be some time before its Mega Cannon Wings could be made. 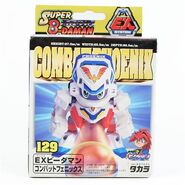 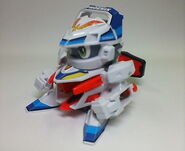 Retrieved from "https://bdaman.fandom.com/wiki/Combat_Phoenix?oldid=41857"
Community content is available under CC-BY-SA unless otherwise noted.