Dashing Tankshell (Japanese: ガトリング=デスシエル, Gatoringu=Desushieru, Gatling=Deathshell) is a Rapid Fire-Type B-Daman released as part of the Emblem Charge System's Gimmick Specialty Series. It released as a Special Starter on June 22, 2013 in Japan for 997円.

It is wielded by Jenta Kokuji in the B-Daman Fireblast anime.

This Head Part is quite bulbous while harboring two, thin spikes jutting upward at its sides. It has a clear violet color scheme.

Dashing Tankshell has a singular Emblem Part consisting of a hexagon surrounded by six other hexagons, giving the effect of the patterns on a tortoise's shell. It can be taken apart and mounted on either Arm Part.

These Stud Parts are cylindrical and of an opaque black coloration. The prototype had pearlescent white Stud Parts.

Tankshell's Arm Parts mold into a bending format while using a spike on each shoulder; protruding outwards similar to the Head Part. They are of a clear violet coloration. The shoulder-spikes can be removed and placed on the feet of Spike=Phoenix's Leg Part.

The feet of the Leg Part seem slightly long and linear. Clear violet is used for its colour scheme. They are hollow, as a means of weight reduction. There are also small peg inserts in the heel of the Leg Part that allow the Dash Stabilizer to be attached as a Version-Up Part.

The Dashing Core features a two-handled crank known as the Gatling Unit, which can be turned backwards to fire a stream of B-Dama, and has a removable grip that can be put on either socket. It uses the same body shell as Sonic, and it is clear purple with black parts. Unlike the Sonic Core, it has no rollers on its Hold Parts, but its cylindrical tips do resemble rollers. The prototype of Dashing Tankshell (see the Toyline section of the Gallery) had this Core Part in a metallic gray coloration, with the Trigger and Gatling Unit colored a pearlescent white instead of black.

Because the Core Part is made of a clear resin plastic, it's potentially fragile. If you take the Head Part off directly, you may end up leaving behind a crack or two. If you wish to use this Core with other Head Parts, remove part of the Core and extract the current Head Part from there, before sliding in a new Head Part and replacing the removed piece of the Core. 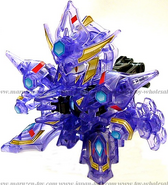 Its trigger (with the Dash Stabilizer attached).