Direct Hit Battle is a game mode where two or more players must aim for the target switch below the opposing B-Daman's barrel. Once a player's B-Daman has been hit directly on the target, its barrel collapses making it unable to fire any further B-DaBalls. All B-Daman had the same DHB armor but molded in different colors. Each also comes with its own Shield Sight, in different colors, which is used to help aim at and target the opponent.

One of the main purposes of this DHB armor is to set an even playing field in terms of B-Daman stats for both the players. The armor (stand-alone and without extra accessories) levels out power, balance, rapid fire, control and accuracy so the game becomes centered on the player's own skills.

Later on, each B-Daman has its own designed armor and this armor varies depending on the B-Daman's core system. This has come to be known as the DHB Advance Core system. 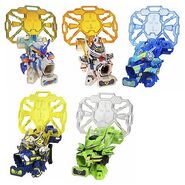 Different B-Daman in DHB armor.
Add a photo to this gallery
Retrieved from "https://bdaman.fandom.com/wiki/Direct_Hit_Battle?oldid=42012"
Community content is available under CC-BY-SA unless otherwise noted.