Double Drazeros (Japanese: ツイン=ドラゼロス, Tsuin=Dorazerosu, Twin=Drazeros) is a Special-Type Core Change System B-Daman appearing in the anime series, B-Daman Crossfire. It is owned by Basara Kurofuchi and is one of the five Legendary Dragon B-Daman. As of Cross Fight B-Daman eS, it was upgraded to Stream=Drazeros, a B-Daman from the Emblem Charge System.

The Head Part of this B-Daman has a crest composed of the twin dragon heads that give the B-Daman its motif. Below the two heads are a pair of fierce, purple anime-eyes and a mouthpiece.

Drazeros' Arm Parts are similar in design to Thunder Dracyan's, but each with a purple jewel at the hands.

Hinged at the back of the shoulders of the Arm Parts are a pair of Wing Parts that each have a space for storing marbles. They can also be folded back to act as grip handles

The Leg Part of this B-Daman resemble pointed boots.

Twin is semi-translucent purple in color with a white barrel, Hold Parts, and an elongated trigger. Its gimmick, is that one can fire two marbles at once with a single push of the Trigger, which is assisted by the elongated core and trigger.

Double Drazeros was found in the abandoned building by Basara Kurochi, who takes it on as his new B-Daman after his WBMA Proto 01 broke during a challenge. It is later revealed that Novu Moru had created Drazeros' B-Daman as part of his scheme to resurrect Smash Dragold, and had left it in that abandoned building. 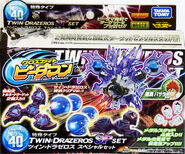