Drive Garuburn (Japanese: ドライブ＝ガルバーン, Doraibu=Garubaan, Drive=Garuburn) is a hybrid Power/Rapid Fire-Type B-Daman, released as part of the Emblem Charge System. It was released on September 29, 2012 in Japan for 945円.

It appears in the anime, B-Daman Fireblast, owned by Kamon Day. Its B-Animal is the Vermilion Bird of the South.

Drive Garuburn's Head Part pays a striking homage to the Vermilion Bird of the South, one of the five heavenly beasts of the Wu Xing; commonly referred to as a phoenix. Primarily having a crimson-coloured face, the Vermillion Bird's head works as a helmet. With pupil-less black eyes, a stuff snout and a large horn protruding to the back; its mouth is slightly opened to reveal the B-Daman's anime-like blue eyes and silver faceplate. Also, a pair of semi-translucent blue Side Pads act as "ears" to Drive Garuburn as well as having the ability to be adjusted to hold the B-Daman in a more efficient way. Several instances of a bright-red are also shown throughout the piece.

Drive Garuburn's Emblem Parts are a pair of semi-translucent circular blue pegs which fit into a large designated hole on each of the B-Daman's Arm Parts. The Vermillion Bird motif is printed onto them as well.

This Emblem is designed to give Drive Garuburn two B-Daman Types, as opposed to the others who usually only have one Type. With Power and Rapid-Fire being used, when the Emblems are pushed down, extra pegs focus onto the Core Part's upper Hold Parts. This allows for the B-Daman to consistently shoot B-Dama whilst retaining the strong power without the short pause Power-Types tend to have and without the weaker power that Rapid Fire-Types normally contain.

Drive Garuburn's Stud Parts are circular bright-blue studs with a triangular-designed hole in them.

Like the Head Part, Drive Garuburn's Arm Parts derive from the Vermillion Bird as these pieces represent the blazing bird's wings. Other than containing holes for the Emblem and Stud Parts to fit into, the detailed feathered wings show off in the B-Daman's glory with some flame-designs appearing as well. The piece also offers short arms ending in a giant fist.

Drive Garuburn's Leg Part are very basic feet that are constructed of two parts. One being the primary piece, a hot-red with blazing designs and two sharp toes with a gap in-between each. This gap is made to fit the remaining piece, a semi-translucent blue "Multi Claw", which gives the Leg Part the appearance of a pair of talons and can be placed as heel spurs in order to allow the use of magazine-type Tune-Up Gear pieces. The Multi Claws can also be attached to the back of Gunlock=Wolg's Leg Part to add stability.

Drive Garuburn's Core Part is designed mainly in white several bright-blue patches and highlights to be seen; concluding with the elongated, bright-blue handle at the back. The Core inherits the rubber Drive Strip from the Accele Core, allowing the marble to spin forward when shot. The rollers on this Core Part's upper Hold Parts not only allows enhanced rapid-fire performance, but also enhances the forward spin on the marble, surpassing the Accele Core from Thunder Dracyan.

Garuburn, like his elemental affinity with fire, has a fiery temperament as opposed to his calmer predecessor. Often times Garuburn is prone to sudden outbursts whenever something does not go with his expectations or he is simply agitated. He would often yell out without thinking about his words but soon after doing so; he will promptly apologize, hence his catchphrase "Oh~I'm sorry, I got so carried away..." [まぁ~済まない 、取乱しったしまってる。。。 (Maa~sumanai, torimidashitta shimatteru...)].

Having said, Garuburn mainly has a serious personality but he knows how to laugh at a good joke like Jenta's. At times, he has a rather morbid sense of humor, such as when he joked about nearly getting turned into soup in the third episode. 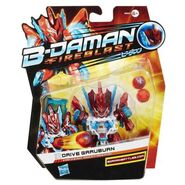 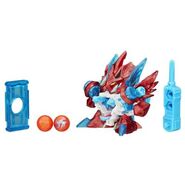 Drive=Garuburn with a Drive Shot 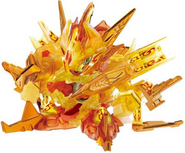 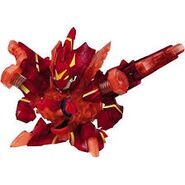 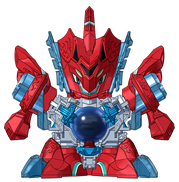 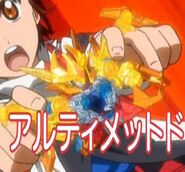