The Tripress Head is modeled after a Triceratops' own head. It features the dinosaur's distinct upper head extended upwards and likes its namesake, three horns (two yellow, one purple). While the yellow ones are larger and extend outward, the purple horn is smaller and aims down. Interestingly though, its yellow horns are actually two of its Emblems. Other than this, the part has added details to make the dinosaur concept connect with lines on its upper head area, red stickers as eyes and a large mouth decorated with another red sticker to depict its mouth's insides. This piece also primarily uses a turquoise colour.

To fit in with what this B-Daman is based on, three Emblems are utilized; this is the only Emblem Charge B-Daman to feature only three Emblems. The Emblems consist of the yellow horns on the Tripress Head and the two others from the Tripress Arm. Also while the yellow horns are designed with a Triceratops's skull on each, its Arm Parts Emblems are depicted with a cartoon-like version of the triceratops' face.

Pushing-in all three Emblems will bring them closer to the Dyna Core. This theoretically adds more friction and force to shoot stronger B-Da Marbles.

These Arm Parts contain two of the total three Emblems on this figure. Each Arm curves in to form said Emblems. Some spikes and details appear on these parts to better illustrate its theme but are turquoise pieces with yellow stickers.

For these Legs, they are somewhat long with spiky ends. Some parts are jagged with holes for presumably aerodynamic properties. What is also intriguing about these parts is that it uses red stickers for eyes and yellow stickers for mouths to emulate a creature's face with the spiked end as a snout.

Dyna is black and a Power-focused Core Part. It uses violet prongs and a tall, violet Trigger that touches the ground rather than being held like most Triggers. 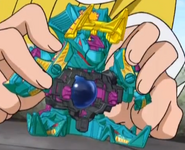 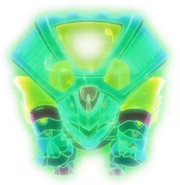 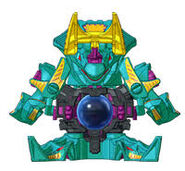 Dyna Tripress CG
Add a photo to this gallery

Retrieved from "https://bdaman.fandom.com/wiki/Dyna_Tripress?oldid=48740"
Community content is available under CC-BY-SA unless otherwise noted.