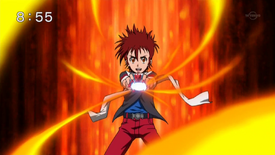 An Emblem Charge is achieved when both of the Emblems on any Emblem Charge System B-Daman are pressed in. This will power up a shot, due to the force acting on it.

When an Emblem Charge is charging up, the B-Der's eyes will light up with the Emblem's symbol representing the B-Daman they are firing from.

Kamon Godai's Drive=Garuburn was the first to use this, using it in I'm Getting Fired Up! Drive=Garuburn!. Upon doing so, the B-Dama shot out as a fiery blaze, showing off the power. It was able to take down all the pins in a single shot due to the combined power of that and the Drive core.

In Vroom Vroom, I'll Sting You! Slot=Beedle!, Mitsuru Hachisuka's Slot=Beedle performed it's first Emblem Charge. The shot performed in a zig-zag pattern and was used to navigate between a gap in two fences during a Road Fight challenge.

On any Emblem Charge System B-Daman, holding in both Emblem Parts will apply force to the B-Dama, effectively causing a more powerful or smoother shot when fired.

Emblem Charge!
Add a photo to this gallery
Retrieved from "https://bdaman.fandom.com/wiki/Emblem_Charge?oldid=48881"
Community content is available under CC-BY-SA unless otherwise noted.