Enzi is an orange-haired young boy whose hair has green highlights. His hair is spiked up and is secured by a red bandanna decorated with a yellow feather and a glass B-Dama. Part of it covers his forehead all the way down to his big eyes with blue irises and white pupils. Enzi has thin, black eyebrows. He also has a light skin tone, small nose and baby blue Native American-like markings on both cheeks.

His choice of attire is quite interesting; fitted with a tee-shirt composed of the colours yellow, red and blue in zig-zag designs. A sleeveless, open jacket is worn as well with rip markings on where the sleeves would have been; he also dons black fingerless gloves. Enzi also wears his trademark fanny pack designed with the crown insignia of his B-Daman, Spike=Phoenix. Other than this, Enzi wears half-torn jeans that cover down unto his knees and black and white sneakers.

At first, Enzi might look like a rough and tumble boy whose only intent is to earn money so that he can buy boxes of Takoyaki. However, in reality, Enzi is a genius B-Daman customizer whose accustomed to all hardships in life even at his very early age. He had since been living alone under the bridge following the death of his father.

Enzi is the type who will never back down from a challenge and he certainly never leaves his friends behind. Furthermore, his beloved Spike=Phoenix meant everything to him in the whole world and he will fight to the death against those who try to buy, take or steal it from him.

Laid unconscious, Enzi Hikigane was devastated to lose the only B-Dama he required to finish his 100 million B-Dama collection. However, he saw a young boy holding one marble and Enzi quickly stood up to take the B-Dama; thanking him. After introducing himself, the boy revealed his name to be Hajime Tamauchi.

Subsequently however, a multitude of large barrels began rolling down the street-way - potential hazards for the civilians. While Hajime ran for his life among many, Enzi chose to run towards it, loaded a B-Dama into his Spike=Phoenix and used his only shot to prevent the barrels from harming anybody. 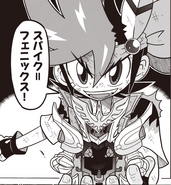 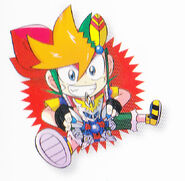 Retrieved from "https://bdaman.fandom.com/wiki/Enzi_Hikigane?oldid=38763"
Community content is available under CC-BY-SA unless otherwise noted.