Gatling Hades (Japanese: ガトリングハデス, Gatoringu Hadesu) is a Rapid Fire-Type Cartridge System B-Daman, and the successor model to Revolver Hades. It was released on October 20, 2005 in Japan for 2,100円 packaged with the Dark Stealth Shot, a special black-tinted variant of the Stealth Shot. It is also the second B-Daman of Aqulas in the Battle B-Daman: Fire Spirits! anime.

The Cartridge Helmet is a redesign of the original Revolver Hades' Visor and Sight, with a more pronounced horn, and a red visor in place of the two yellow anime eyes, with faint impressions of irises.

Gatling Hades' Cartridge Arms are straightly positioned either side of the Hades Barrel locked in fists. Some details such as finger indents and armor holes are present; despite these being small parts. Though there exist blocky, P-shaped shoulder pads (as aesthetics) for each Arm, quite long as they reach halfway down to the Cartridge Feet. Red stripes decorate the pads, while the Cartridge Arms are black elsewhere.

The feet of the Cartridge Foot are elongated, black pieces with small detail such as line indents. In addition, they partly resemble cleats due to the pointed spikes jutting beneath the Feet.

The Middle Barrel is one of Gatling Hades' unique parts. As a Barrel, it consists of two pieces: a front and back. The back piece is larger and connects directly to Gatling Hades. However the back piece connects to its front counterpart to provide additional accuracy support. A triangle-shaped protrusion appears on the Barrel's back piece possibly for sight, but is negligible due to its placement. The Middle Barrel can attach to the end of a System Barrel.

Some holes are found on both pieces for aerodynamics, along with more lines of indents. It does use its own stickers, with the most prominent being its signature "GATLING HADES" applied on both pieces. Also, like Gatling Hades' other pieces, it utilizes a black color scheme.

The Charge Drive System boasts a spinning gear-based firing mechanism, similar in nature to Mega Diabros' Motor DHB Core, but hand-operated by means of the Charge Trigger. This lever can be squeezed to bring the wheel up to the desired speed, which is determined on how hard the user squeezes it. In front of its magazine, which can hold 5 B-Dama, is the actual Trigger, which can be used to pass the B-Dama to the spinning gear and a pair of two Hold Parts (each one with a small rubber strip) vertically sliding on springs, to flick them out through the barrel, firing them. The Charge Trigger can also be adjusted for three different firing modes. It also has the unique Gatling Trigger Body, to which the Cartridge Helmet, Arms, and Foot pieces can be attached, along with the Barrel. 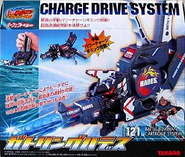 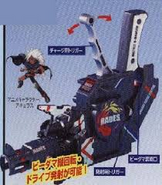 Retrieved from "https://bdaman.fandom.com/wiki/Gatling_Hades?oldid=47422"
Community content is available under CC-BY-SA unless otherwise noted.