Gill Scorpion (Japanese: ギルスコーピオン, Giru Sukoopion)  is a Rapid Fire-Type Blaster Core System B-Daman belonging to Haja. It was released in Japan in December 11th, 2004, and sold for 924円, while coming packaged with the Random Shot.

(Note:The status of this B-Daman is based on the game "B-Daman Fire Spirits GBA")

Gill Scorpion features a black skeleton, to which all the Armor pieces can be attached.

The large and red Scorpion Visor features a yellow line visor, along with a black rubber fin that can be used similarly like the Cobalt Power Blade as means of aiming. Lengthwise, it is one of the largest Visors.

The Gill Shoulder pieces are wide and of an intimidating design, with black rubber tips.

The Scissor Arms each have a pair of rubber claws, along with a sticker with a black scorpion design.

The Foot Armor of Gill Scorpion, each piece of the Scissor Foot feature a pair of rubber claws, to provide better grip on the floor of the playing field.

Contrary to the name, the Long Magazine increases the load capacity of Gill Scorpion by only a small amount.

The Quick Loading Core features a slot with three prongs on its underside, that allows the user to load B-Dama from the floor of the playing field by lifting the B-Daman up, and engulfing the slot onto the B-Dama. It also features a long, orange Trigger for rapid fire, in addition to two orange Hold Parts. NOTE: It is illegal to use this Core in a Direct Hit Battle, due to the part of the quick-loading method where you have to lift the B-Daman, in addition to lifting your B-Daman in the air being against the rules. Then again, this Core cannot use DHB Parts.

Haja and Gill Scorpion on the intermission screen 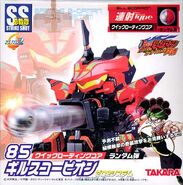 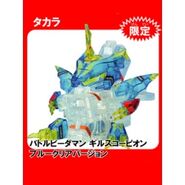 Retrieved from "https://bdaman.fandom.com/wiki/Gill_Scorpion?oldid=48402"
Community content is available under CC-BY-SA unless otherwise noted.