Go-Tiger (Japanese: 剛大牙, with a special reading/pronunciation as ゴウタイガー "Goutaigaa" but written with kanji traditionally read as "Gou", "Dai", and "Kiba" - roughly meaning "Strong Great Fang") is Kiba's B-Daman from the Blaster Core System and is a combination Power/Rapid Fire-Type unit.

Has a Japanese symbol over a yellow background.

The Tiger foot has 2 claws and has golden foot pads.

This Core features a gear-driven short stroke firing mechanism, along with a rubber strip for forward-spinning drive shots. 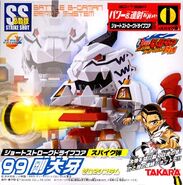 Go Tiger in CoroCoro Magazine 2005
Add a photo to this gallery
Retrieved from "https://bdaman.fandom.com/wiki/Go-Tiger?oldid=48594"
Community content is available under CC-BY-SA unless otherwise noted.