A wild B-Shot who belongs to the East Block.

His B-Daman is the power type Thunder Bearga.

He demolishes the targets with powerful plays that utilize his large physic.

He is an athletic type who is usually calm and kind, but when it comes to competing he gets more excited than anyone and has a strong sense of justice.

Grizz Sukino is an 15 year old boy with dark skin, purple hair and purple eyes. His hair is short and spiky and his eyebrows are long and dark purple. He wears a white t-shirt and a purple stripe, he wears it under an orange/brown button up top with flower designs, purple stripes and a purple pocket protector. He wears bright blue shorts with yellow stripes and brown sandles with a toe guard.

Grizz debuts in the the secret training facility welcoming Riki with several other members. He is the first one to go up against the testing machine when he dominates the first stage using his Super-Shot, "Claw Slash". Afterwards, he is tested with another stage where he fails to succeed. After that, he is seen among other members laughing at Riki's poor preformance on the second stage.

Wait a minute! He's the Champion?!

Grizz returns at the second Crossfire challenge, Encahnted Long Bridge, but loses his ranking to Riki and Kaito. During Kaito's challenge, Grizz is seen ridiculing him, due to his lateness, and later on cheers Riki's first place performance. 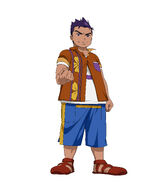 Grizz among the Facility Members

Grizz about to fire. 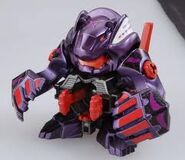 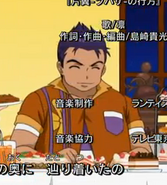 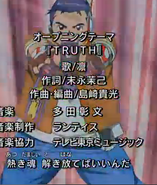