Hugo is a tall, 12-year-old boy with brown hair and gold eyes. His hair is long and bushy much like the mane of a lion, and his eyebrows seem to be cut into sections. He wears a collared shirt under a yellow-and-red striped vest. He wears brown khaki pants with brown boots, as well.

His B-Daman, Thunder Leo, excels at the “Spin Shot.”

He is a hot-blooded B-Shot who shocks onlookers with his wild howls and unconventional behavior. He gets along well with Derek.

Hugo is a wild acting boy who takes a strange liking to African wildlife, most particularly lions. He seems to want to become as much like a lion as possible, hinted by his hair style and his constant roaring in public (in the English dub, he does a Tarzan-style yell). He also lives and trains outdoors giving him a rough edge against his opponents. He also has an ambition to defeat all Dragon-type B-Damans, to prove the power and superiority of his Lion-type, due to having heard some B-Shots claiming that Dragon-types are cooler and stronger than lions.

Hugo breifly appears and defeats Kaito Samejima in a head to head battle at the B-Daman park at the end of the episode. Kaito breaks his core and Hugo confronts him saying he isn't worthy to be his opponent and wants to know about his friend with the dragon type B-Daman.

Hugo meets Riki who confronts him over Kaito's loss. Hugo explains that this was part of his plan knowing that Riki would challenge him from revenge. Hugo challenges Riki who loses due to Thunder Leo's spin shot and Riki breaks his Accele Core due to over use. Later he registers his Thunder Leo giving him a vision of Leo's B-Animal. After Hugo discovers Leo's hidden B-Animal he also discovers the location for his first Cross Fight. While at the Cross Fight Hugo uses his B-Animal to complete his first challenge with shining colors. He challenges Samuru stating that he doesn't care about Crossfire and just wants to prove that his B-Daman is superior. Riki interrupts saying that he and Hugo still have a score to settle. In order for them to compete in crossfire, Grandpa Takakura sets up a Cross Fight competition with all the player from the east and west blocks.

Hugo trains for the upcoming Cross Fight which has been announced to be the most important thus far. After his training he arrives at the Cross Fight and completes his first challenge there in record time. Hugo participates in the WBMA Crossfire event and dominates the first round. In the top five he battled to third place being eliminated after Grizz and Yuki. 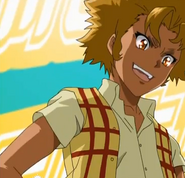 Hugo roaring in public in front of a movie poster