The IBA Body (Japanese: ビーダマンゼロ, Bīdamanzero, B-Daman Zero), also known as the IBA Blaster in the Hasbro sets, is the basic framework for every B-Daman in the Zero System. It also appears in the Battle B-Daman anime as a generic B-Daman. They come in a multitude of colors.

Each IBA Body skeleton consists of these components, all of which having areas to which Armor can be attached.

The Zero Head is the area to which Head Armor and Visor pieces can be attached, via three prominent slots; two on the sides, and one on the forehead area. On the top of the head itself is an Armor Connector, which is usually covered with a cap, and is an area where accessories such as the Scope Head could be attached. On the back of the head is the feed for B-DaBalls, to which Magazine Armor could be equipped, to increase the B-Daman's loading capacity. A Large Capacity Magazine can also be attached to the back of the head and will also utilize the Armor Connector for extra grip on the B-Daman. The cap that usually covers the Armor Connector is necessary for keeping the two upper body pieces joined together.

The Zero Arms are the places where the Wrist and Shoulder Armor can be equipped, by means of a slot on the forearms and a peg on each shoulder respectively.

Each Zero Foot has a slot on the instep area, where Foot Armor can be attached. They also have slots in the back where Heel Armor such as Rekuso's Dragon Claws can be fitted in for extra rearward stability. The Zero Foot alone also helps keeps the two lower body pieces joined together.

A set of two standard Hold Parts, through which B-Dama are pushed through with the Basic Trigger to fire them. On the back of the Hold Parts are holes to which Wing Armor can be attached.

A Trigger of standard length (approx. 3.5cm), a simple plunger-type mechanism with a spring that pushes it out after it is depressed. It has an area on the back where Trigger Armor can be attached. 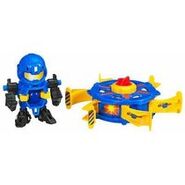 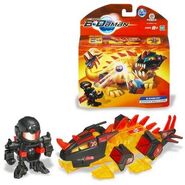 B-DaBattling introduced in the first episode of Battle B-Daman.
Add a photo to this gallery

Retrieved from "https://bdaman.fandom.com/wiki/IBA_Body?oldid=41887"
Community content is available under CC-BY-SA unless otherwise noted.