Impact Shark (Japanese: インパクトシャーク, Inpakuto Shaaku) is a hybrid Power/Control-Type Blaster Core System B-Daman owned by Jinbee in Battle B-Daman: Fire Spirits!. It was released in Japan in May 2005, and sold for 924円, coming with a pack-in Impact Shot.

(Note:The status of this B-Daman is based on the game "B-Daman Fire Spirits GBA")

Impact Shark has a blackish-colored skeleton, to which all the pieces can be attached.

Shark Head, as the name suggests, has a shark motif with yellow-irised angry eyes, white designs, and a yellow fin for aiming at targets. There is also a red visor in the shark's mouth.

The Shark Shoulder parts are barrel-shaped, with a vent-like design on either end. On the left shoulder piece is a shark logo, with the B-Daman's name above it. On each shoulder is a yellow shark fin, as well.

The Shark Barrel resembles a shorter, rounder version of Bakuso's Focus Barrel, and can be attached to the front of any Core.

Each piece for the Shark Foot, is of a rounded, arrowhead-like design, but mostly for cosmetic purposes.

The Striker Core has two side-triggers, and as the name suggests, a Striker shot mechanism. Its Side Triggers can be pulled (rather than pushed) to fire shots. For stronger shots, the user has the pull back the Center Trigger to build up pressure, and then pull the Side Triggers to fire. 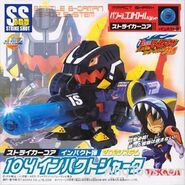 Impact Shark
Add a photo to this gallery

Retrieved from "https://bdaman.fandom.com/wiki/Impact_Shark?oldid=41888"
Community content is available under CC-BY-SA unless otherwise noted.