Jet=Leohjya (Japanese: ジェット=レオージャ, Jietto=Reooja) is a Power-Type Emblem Charge System B-Daman, and the successor to Thunder Leo. The Core and Body Set was released on May 25, 2013 as separate products.

The Leohjya Head 2 has a lion motif on it with a mane, and is redesigned from the original JSpin=Loehjya. On the top of the head is a spike that you can use it as a sight. Its visor is located in the lion's mouth. There are places to place your pointer and your middle fingers on.

The Emblems are located at the backhands of the Leohjya Arms 2. The Emblem Parts are solid light blue and has a lion's head on it. They are hinged, and have a wide area, making them rather easy to press for an Emblem Charge.

The Stud Parts are bright red in color.

The Leohjya 2 Leg Part has the details of a lion's hind legs. There are small, green rollers on the front of the legs that can be detached and placed on the heels to act as stabilizers. The tires on the rollers are made of rubber or similar material, and the rollers' normal positions serve as part of the Jet Core's gimmick.

Jet is a Core Part with a pair of wheels at the back on an internal axle with a simple gear system. The wheels are moved when the Trigger, which has teeth to activate the gears, is pushed, firing the marble and making the B-Daman move forward. The Trigger also has a removable pad that resembles a lion's mane. The main gimmick of the Jet Core is that when the marble is fired and the B-Daman moves forward, the former would be given more thrust. The rollers on the Leg Part must be in their primary mode for the gimmick to work. The green tires on the rollers and the Core's rear wheels helps it to grip the floor of the playing field more effectively. 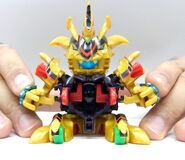 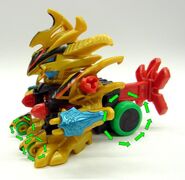 How to detach the small rollers. 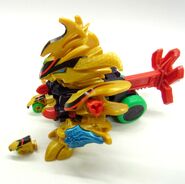 Beside its removed rollers. 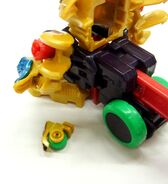 The detachable smaller rollers beside their second position. 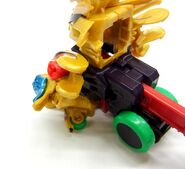 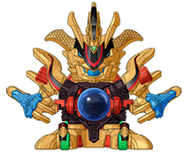 Jet Leohjya With The Rollers Applied