Jinbee is a character appearing in the anime series, Battle B-Daman: Fire Spirits!. His B-Daman is Impact Shark.

He is a large sized boy who wears an armor that heavily resembles a shark. His eyes are frequently closed, and he only opens them on occasions. He is also frequently potrayed as a coward.

Jinbee was a normal boy who participated in the Winner's Tournament with the Strike Shot, Impact Shot. After he passed the first round, he attempted to approach Yamato Delgado, who was fussing over Terry not reaching the venue of the Winner's. He immediately assumed that Yamato was trying to ignore him; and came up with several plans which failed, which caused him to never forgive him. After the Winners Tournament, he was dragged off by Haja to join B-Deus as a "servant", doing most of the chores.

Jinbee is part of Team Junk, a group of people who were banned from official games due to breaking the rules. Jinbee broke into the battle between Wen and Kiba halfway through, and was eventually stopped by Terry who also joined in.

Jinbee first appears outside the Winners Tournament Stadium. He Has the Strike Shot: Impact Shot. He challenges Yamato and loses even with the help of his Strike Shot. He helps Yamato sometimes.

A Dumped Design for Jinbee 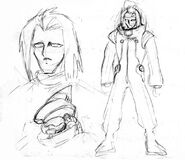 A Dumped Design of Jinbee 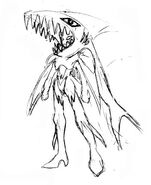 A Dumped Design of Jinbee

Retrieved from "https://bdaman.fandom.com/wiki/Jinbee?oldid=40271"
Community content is available under CC-BY-SA unless otherwise noted.