Joe appears to be a blue haired warrior with a red undershirt, boots and a green over cloak. He also wears a gold, ruby encrusted headband. As the guardian of the Phoenix Stage he is a skilled B-Da Player. Joe is a friendly but a bit cocky B-Da Player who is trained in the same martial art as Terry. Joe is very humorous and confident in himself which causes him to get carried away and lose focus.

Joe first appeared in the winners tournament as Player X and dominated the qualifying rounds by scoring a perfect 100 and disrupted the broadcast with his incredible firing power.

Joe makes his true debut at the Five Field Challenges as the guardian of the Phoenix Stage. It is also revealed that he and Terry are former training partners and Joe is a very powerful B-Da Battler and Martial Artist. Bull Borgnine then decides to challenge Joe on the Phoenix stage. Joe starts the match and scores a perfect 100 by knocking down all the B-Daman, but Bull does the same ending round one in a tie.

After impressive displays of power the second round ends in a tie as well. The two now continue round after round of ties until Terry reveals his weakness within the fact that Joe gets very wacky and carried away, problem is Bull is the same way. The battle now comes down to who fatigues first, Bull is at a disadvantage due to his lack of food. On Joe's last try he only knocks over 5 B-daman, giving bull a chance to win. But Miss Karat interrupts the match and feeds Bull giving him his strength back, but to Bull's displeasure he destroys the rail that knocks over the B-Daman, losing the match.

Joe is next scene at Cain's reunion party celebrating Yamato's success. Joe returns when it is revealed that the five field guardians were hired, and now rehired to stop the creation of Cobalt Saber but were all stopped when Yamato defeated Joshua.

Joe's next return would be on his way Subakura city and is followed by Wen and Li. Before Enjyu destroys Terry's home Joe steps in and defeats the Neo Shadow Alliance Soldiers with him. After Terry's Wing Ninja is destroyed Joe gives him his Blaster Core skeleton and tells him to get the legendary parts from within Lake B-Daman. When the Neo Shadow Alliance returns to,Terry's home Joe helps defend it along with many of his fellow martial artist B-Da Players. During his battle he is challenged by a Cyborg Samurai like B-Da Player who almost defeats Joe until he is saved by Terry McScotty and his Wing Sword.

Joe returns alongside Assado to provide support for Yamato and the others to retrieve the B-Energies. Interfering, he and Assado are both frozen but soon freed by Yamato and the others success. Joe and Assado later assist Bull in defending Neon City against the Neo Shadow Alliance attack but are quickly frozen by Marda B's Harrier. Joe and everyone else is freed by Marda Biarce's defeat and are seen at the ending seen of Battle B-Daman.

Joe returns in Battle B-Daman Fire Spirits! while training with Terry. They both end up entering the tourney for the Metal Shot strike shot along with Yamato and Gunnos. After a long fought trap shooting battle Gunnos ends up winning the Metal Shot.

Joe is later seen with Terry when they enter another tournament challenge to receive a Strike Shot. Prevailing over Terry, Joe earns the Random Shot. Later on the two are challenged by Haja who steals the random shot and is challenged by Terry. Haja uses his special move along with the random shot to fatally attack Terry. Joe pushes Terry away and takes a direct hit from Haja's poisonous attack costing Joe his life. In his final moments he tells Terry to enter the championships without him.

However, Joe did not die. He reappeared after Terry lost against Feresu during the final match.

The Phoenix Stage is a T shaped stage where the guardian and challenger must fire two B-Daballs at a spinning rail that knocks over six B-Daman. This stage requires power and endurance of the B-Da player. 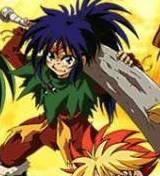 Joe and Assado trapped inside a crystal

Joe, with Assado and Miss Karat

Joe's design in the Manga.
Add a photo to this gallery

Joe revealing himself to Terry

Retrieved from "https://bdaman.fandom.com/wiki/Joe_Tetsunosuke?oldid=43747"
Community content is available under CC-BY-SA unless otherwise noted.