Justice Ifrit (Japanese: ジャスティスイフリート, Jiyasutisu Ifurito) is a Power-Type Synchro Weapon System B-Daman released in Japan on July 20th, 2006 for 945円, also having an early release in June at the 2006 Summer World Hobby Fair. It is owned by Hitto Tamaga in the anime and the manga.

The new, redesigned Ifrit 2 Core B-Daman Block features an Astral Drive System in its core, consisting of a set of five Hold Parts, and a rubber strip for drive shots. To reduce unneeded friction, four of the Hold Parts each had a groove cut into it. Its physical features are also re-designed from the original Magnum Ifrit, with a new helm that has a fin along with flame stickers on either side, and new shoulder guards with fins like a jet fighter. The shoulder guards also feature "CAUTION" labels.

The Power Assist Armor, attachable to the arms of the B-Daman, squeezes in the Hold Parts for an extra boost in power.

Fire features a design for easy handling and like all Synchro Grips, features a sub-trigger on the rear for firing Synchro Weapons, and the handle is removable so that it can be interchanged with other Synchro Grip handles. It also features a Power Gear for powerful shots.

Justice Ifrit was first obtained by Hitto Tamaga during the 25th episode when he fought against a Masked Man who turned out to be his missing father.

In Episode 46, Justice Ifrit evolved to it's Burning version after Hitto uses the two marbles tucked in his hairpin to save the life of Jubee Sanada.

Magnum Ifrit evolved into Justice Ifrit during Hitto's battle against Kyousuke Arasaki in the Magajin Tournament. Enraged by the "death" of his "father;" Hitto unleashed his true power as the Perfect Descendant of the Evil Deity, a power which was thought to have been locked away and Magnum Ifrit evolved along with him.

Later on, Hitto would use the Justice Ifrit to fight against his true father and the Ultimate Bahamut. 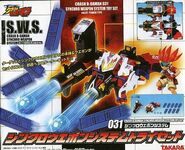 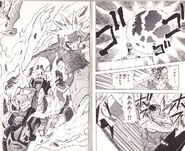