König Cerberus (Japanese: ケーニッヒケルベロス, Keenihhi Keruberosu) is a B-Daman in the Over Shell System. It was released in December 1997 in Japan for 680円. It is owned by Ijūin Atsumasa in the Super B-Daman anime and manga.

The Head Gear is black, with a canine-like design and green eyes and spikes jutting upward and rearward to resemble canine ears. In between the eyes is a whitish hexagonal design possibly meant to resemble a dog's nose, in addition to two smaller designs on the sides of head resembling fangs, given the B-Daman's motif. On the ears are gradient red/orange/yellow designs, with a smaller one of the same color in the forehead. On the back of the Head Gear, and as with all other B-Daman in the Over Shell System, there is a removable hatch that allows for the attachment of magazine-based pieces.

The Feet Part of this B-Daman is black, with gray designs lining the edges of the soles.

The System Core has a set of three red Hold Parts known as the Bloody Claws on a rotatable ring. Squeezing in the rotating Hold Parts for increased power is a gray Power Ring, held in place by the Tight Shoulders on the Side Arms. On one of the Bloody Claws is a black rubber strip, in addition to the Core itself being twice as spacious than with most other B-Daman in the Over Shell System, along with an elongated red Hyper Trigger with a lip reaching downwards. All of these elements lead to the B-Daman's multi-function gimmick. The Hyper Trigger can be used to fire two B-Dama at once in a single push. The Bloody Claws can also be adjusted so that the rubber strip can be used for drive shots, back-spin shots or spinning shots of both directions. In the holding space of the System Core is a rubber piece that is similar in function to Junker Unicorn's Hold Stoppers.

König Cerberus also comes with a Short Barrel featuring a dial that can be used to adjust the rotation angle of the Hold Parts, and can be used with the O.S. Gear. 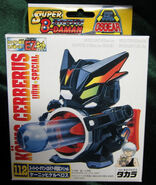 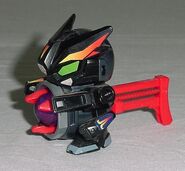 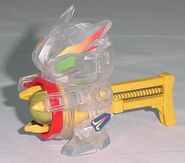 König Cerberus Clear Ver.
Add a photo to this gallery

Retrieved from "https://bdaman.fandom.com/wiki/König_Cerberus?oldid=41899"
Community content is available under CC-BY-SA unless otherwise noted.